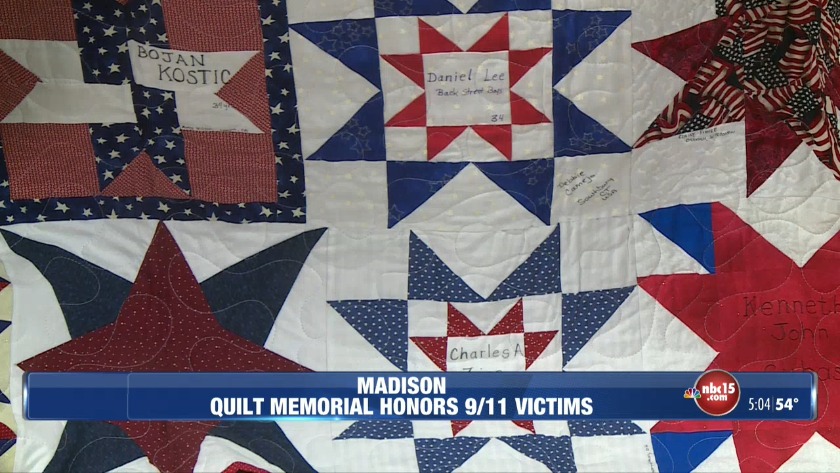 The project was started just after the Sept. 11 attacks by a 911 dispatcher from Arizona. Amy Sie Leasure-Hedt asked people to send her quilt squares with star patterns in red, white and blue, and she received 20,000 squares from 30 countries.

The quilt squares were organized and then sent to quilt groups across the U.S. where quilters put them together and sent them back. Leasure-Hedt died before the project could be finished, and Brian Kohler, another quilter in Seattle took over the project.

The names of the almost 3,000 victims in the 9/11 attacks are written on the quilts, one per square, as a way to remember them.

"People know people, people have friends, people knew people. A man, a gentleman we showed in Berrien Springs, when we said here's the name of the victim and their age, he said 'That was a friend of mine, I knew him'," said Beverly Kuemin, who is now in charge of the quilts and is taking them on tour.

Kuemin said almost everywhere she goes, she meets someone who knew a victim.

"A lady was looking for her best friend's block. He worked in the towers and she did too," Kuemin remembered. "He was already up on the floor and he was the one pushing everyone into the elevators to get them out and he didn't make it out of the towers."

The quilts will be open to the public starting Monday, May 13 from 9 a.m. to 9 p.m. The exhibit will be up until Wednesday.

Some bars begin to reopen in the Chippewa Valley

Dozens of bikers ride by for local man's 30th birthday

Some bars begin to reopen in the Chippewa Valley

Dozens of bikers ride by for local man's 30th birthday