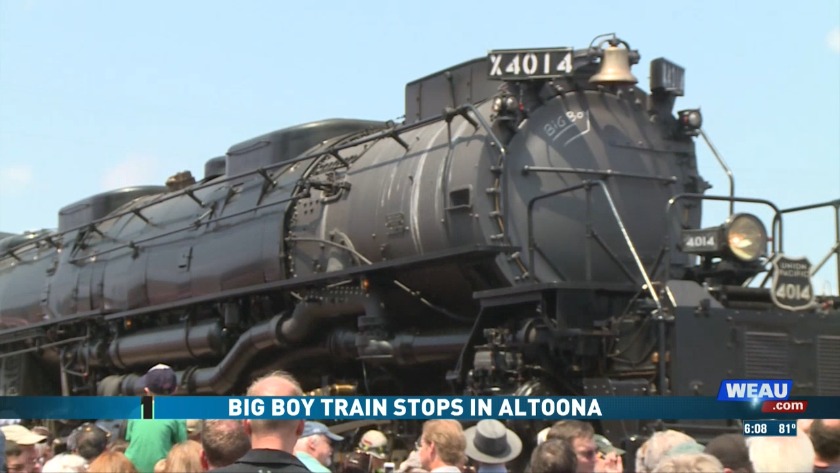 ALTOONA, Wis. (WEAU) -- The Union Pacific Big Boy No. 4014 locomotive made a stop in Altoona on Tuesday as thousands gathered to greet the iconic train.

The 4014 is the only operational Big Boy steam locomotive in the entire world.

The trip across the Midwest by the locomotive celebrates the 150th anniversary of the completion of the Transcontinental Railroad.

Brendan Pratt, Altoona Mayor, invited people out to see the train and watch it take off Wednesday morning.

"Today we've got the Big Boy, the world’s largest steam engine,” said Pratt. “At 8 a.m. on Wednesday, it will be leaving town, so you do have a chance to actually watch it run and leave out of town Wednesday if you like."

The 4014 is the only operational Big Boy steam locomotive in the entire world.

Engineer, Ed Dickens, reflected on this monumental achievement and what it means to them to see all of the people greet them as they pull in.

"Well, it's really heartwarming,” Dickens said. “It's kind of an emotional experience for us because people are so excited to see the locomotive. It makes all of the difficult work and the two and a half years of hard work that we invested in the locomotive, it makes it really worthwhile for us."

There were many people from all over the Midwest in attendance to watch the historic train, but organizer Mike Golat, says it means a lot to the City of Altoona.

"Altoona was built to be a railroad town,” Golat said. “It has a railroad heritage ever since it was formed and today we’re celebrating that history and heritage."

Train enthusiast, John Kinville, said that it is an honor to be able to see a train that many thought would never ride the rails again.

"It's a wonderful thing for everyone to see for older people and kids,” Kinville said. “A lot of kids have never seen a steam engine especially one as big as this."

Dickens had one final message for those that are going out to see the train.

"Everyone please be very safe along the railroad tracks when you're here to see the big boy,” Dickens said. “Do not take photographs from the track and stay 25 feet back."

The big boy locomotive will be in Altoona until 8 a.m. on Wednesday.

The organizers invite everyone out to see the train off as it heads off to warrens Wisconsin, en route to Adams where people can stop and see the train as well.