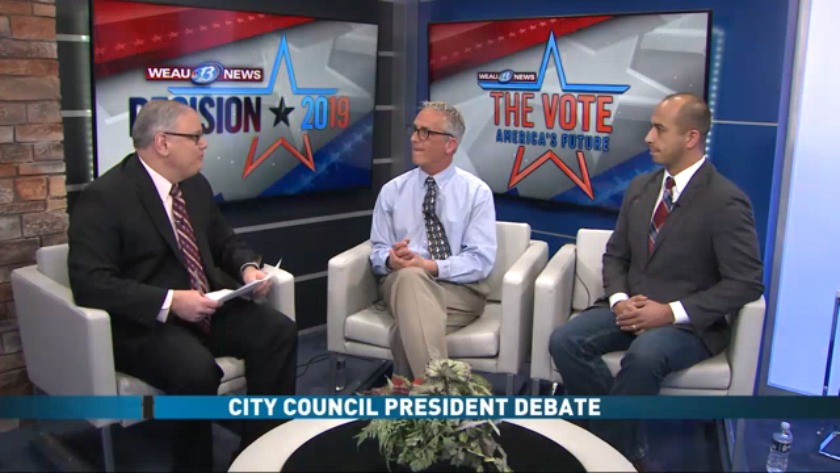 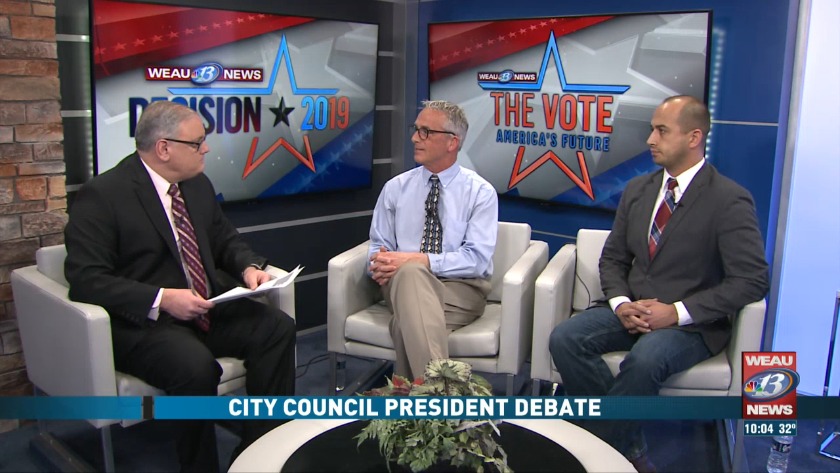 The first question put to the candidates, what are the most important challenges facing the city and the council?

Weld said, "I would say housing certainly is at the top of the list, in all ranges. I would say I think we are addressing it, and will continue to address it as far as a priority goes. Our budgeting, we are getting to the point we are running Eau Claire on a shoestring for the most part due to the levys and such and the restrictions that we have, it's getting harder and harder. Eau Claire is growing and it's prospering to a certain degree and we have a lot of needs and it's getting difficult to meet those needs, so I would say budgeting and housing will be the two big topics."

Werthmann says, "And so I have pointed out on the campaign trail that we have 3,000 new jobs in our community, we have brought our unemployment rate from 8.8 to 2.2. percent, but not everyone is sharing in that success. And wages are still not keeping pace with the rising of living and so I have talked about affordable housing being our number one pressing issue and how do we make sure that as we are a growing community and a community that folks are coming back to that we are providing a place for folks to be able to have an affordable roof over their heads. So that's my number one issue, the other thing I've focused on is how do we invest in our neighborhoods? How do we make sure that we not leaving any of our older neighborhoods behind so I talked about making sure we reduce, or remove all of our lead pipes from our streets and I talked about making sure that our parks and our green spaces are taken care of."

With the renaissance in downtown Eau Claire, the new housing, the business developments, of course the Pablo Center, both candidates talked about the importance of continuing to attract potential workers.

Werthmann says, "Absolutely. And what I think that we've shown is that when you invest in a high quality of life and the amenities that come with it, is that it attracts business and attracts the JAMFs of the world and the Drylock and the good paying jobs and so I think our economic development has to continue to make sure that we are on that cutting edge of investing in our downtown but we also have to be focused on making sure that everyone is part of that and can share in that success."

Weld countered saying, "Really the only thing that I would add is just to continue to retain the graduates that we have here not only in our tech but our university, finding a reason for them to stay. As Andrew mentioned, we have created this wonderful community, and we want them to be here to start that next generation."

Terry, at a recent candidate forum, you talked about the president's job for the council is "to lead, not steer it", could you talk about that statement?

Weld said, "Yes, I guess that I feel like the council president is a role that is there to make sure that we are mindful of all 70,000 people in our community and making sure that our representatives, both our district and our at-large representatives are out there being with and meeting with the people, which I that they are, I think everyone works for the heart of that. But I guess, putting those 70,000 individual needs first before anything else so I think that starts with the leadership and I guess being independent and being I guess as neutral as possible when leading it."

Andrew, at that same candidate forum, you addressed poverty as a "keystone" to your campaign. Could you talk about that issue?

Werthmann explained, "We are seeing in our reports right now that we have 46-percent of our community that are living just paycheck to paycheck, that's the ALICE report, we have 16-percent poverty in our community and I remind people every night that we have people sleeping on our streets and we have to do more in our community. But not only our city council but our public and private partnerships to make sure that we don't have folks living on our streets, it's not okay and a keystone part of my campaign has been about making sure that we are taking action to lift everyone up."

And Andrew, in any election there is going to be change, new faces on the council. How important is it for whoever is elected as the president to work with those members and their concerns for the people that they represent?

Werthmann says, "They have to. That's the role of the council president is to make sure that they are working with the entire council to make sure whether it's district representatives or at-large representatives that those ideas are brought to the table, are discussed. One thing that I'm proud of is that we opened up our first public listening session at every single council meeting, so if you have any idea that you want to bring down to city council and speak about you can now, whether or not it's on the agenda and I'm proud of that."

Terry, same question to your, why is it so important to work with all ten of those council members?

Weld says, "Again, creating that consistency, creating the balance, I think the community is asking for now is just making sure that there is representation for everyone. So as council president, building those relationships with both the council members and carrying that forward into our neighborhoods and their associations and trying to build and strengthen those relationships as well so there is that ongoing communication at all times."