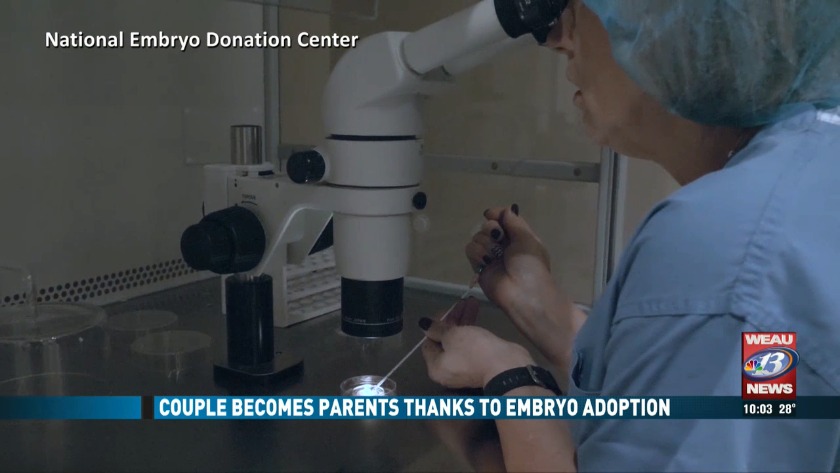 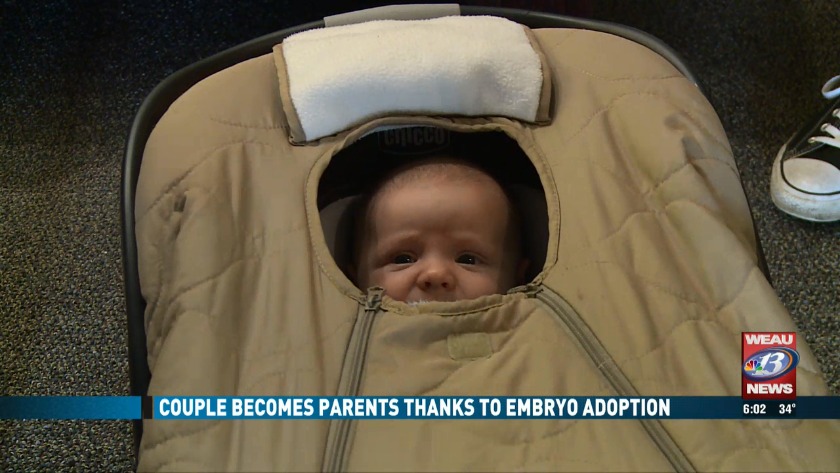 EAU CLAIRE, Wis. (WEAU) - When Jonathan and Kelly Varver got married, they knew they wanted to have kids, but weren't sure if they could.

"When we got married, we had definitely passed out mid-30s and so we kind of knew that it was harder to get pregnant after 35,” Kelly said.

While at first glance they may look like your average new parents, their story of starting a family comes with joy and heartache.

“We actually became pregnant within 6 months and then we had a miscarriage,” Jonathan said.

The months after losing her first child were almost more than Kelly could handle.

"We were crushed, it was like adding insult to injury, we were still struggling with the heartbreak of a miscarriage,” Kelly said. “Then when you add infertility on top of it, and it is the deepest, darkest, saddest thing I’ve ever gone through.”

Then, Kelly learned of a process called embryo adoption. The process uses embryos that are cryogenically frozen and held at the National Embryo Donation Center in Knoxville, Tennessee until someone adopts them.

"There was just this burning desire in me to be pregnant again and to give birth to a baby,” Kelly said.

Jonathan said he wasn't so sure about it after Kelly told him.

“I was skeptical at first, I had never heard of adopting an embryo before,” he said. But I was very curious and it was a chance to go check it out.”

After some tests to determine if she was a candidate for embryo adoption, Kelly was able to become pregnant again.

“When I got the phone call, I just dropped everything. It was so surreal, it still is to me,” she said. “He came from an embryo that was frozen 14 years ago and he's here now.”

Now, Samuel is just over two months old. The Varvers say he is happy and healthy.

"Just watching him develop. I mean, just after a day you can see a difference,” Jonathan said. “His attention and sight are getting better and he's starting to talk to us now.”

For Jonathan and Kelly, they encourage people to think about starting a family with embryo adoption.

“Bringing that life is just an amazing experience,” Jonathan said. “I still get teary eyed thinking about.”

According to Jonathan, Samuel is a biblical character who was born after his mother, Hannah, who was told she could not have children. Kelly said God heard Hannah when she cried out to have a baby and God heard her and her husband.