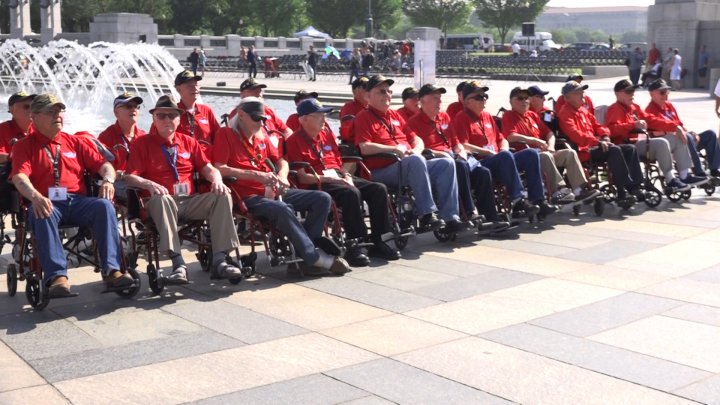 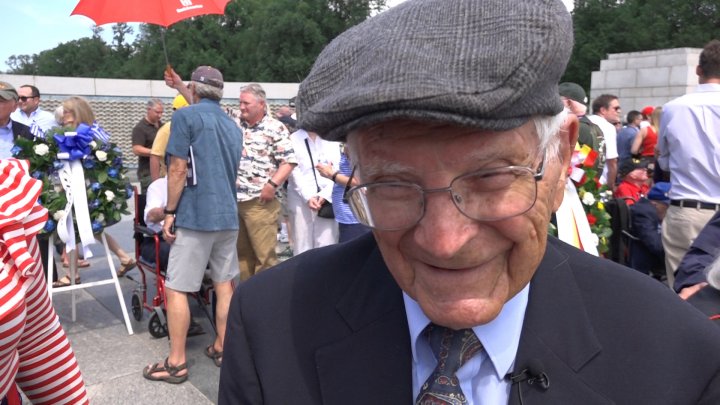 WASHINGTON (GrayDC) The world remembers the 75th anniversary of D-Day. On June 6, 1944, U.S. forces, along with other Allied troops, stormed the beaches of Normandy in France. The invasion was the first step in turning the tide against Hitler and the Nazi regime.

There are commemoration events taking place on those very beaches, and in the nation’s capital too.

“We were busy getting out of the water, getting onto the beach,” said Zeitchik.

“I didn’t know what was happening. Not frightened because I had all the GIs around me. My job was to take care of the maps so that units could have direction,” said Zeitchik.

Zeitchik was one of 37 World War II veterans honored in the heart of Washington, D.C. Thursday, commemorating the 75th Anniversary of D-Day. Leaders and the public paid tribute to the “Greatest Generation” who made it out alive.

“Those who did return were changed forever…they were the true sons and saviors of democracy,” said Jeffrey Reinbold, the Acting Superintendent at the National Mall and Memorial Parks.

Each of the veterans at the ceremony—including Robert Levine—were treated like celebrities.

“What a crowd,” said Levine, while taking a photo.

Levine was 19-years-old when he landed on Utah beach in Normandy. He was wounded one month later and captured by the Germans. Believe it or not, a Nazi doctor saved his life.

“Who would believe that you could become friendship out of the war? That’s amazing. We’re still friends. Extended family,” said Levine.

D-Day was a turning point in the war against Hitler and Nazi Germany. But the invasion in Normandy came at a high price—more than 2,500 Americans, including Barbara George’s father. He died a day later.

“It’s awesome and it’s sad. It’s overwhelming and I’m glad I finally got to pay tribute to him,” said George.

George never got to know her father, Captain Malcolm George, who served in the 4th Infantry Division. He is buried in Normandy, alongside so many others who paid the ultimate sacrifice.

There are more than 9,000 Americans buried in Normandy from the bloody battles.

President Trump plans to speak at March for Life on Friday

Impeachment trial: Dems say oust Trump or he’ll do it again; ‘he is who he is’

President Trump plans to speak at March for Life on Friday