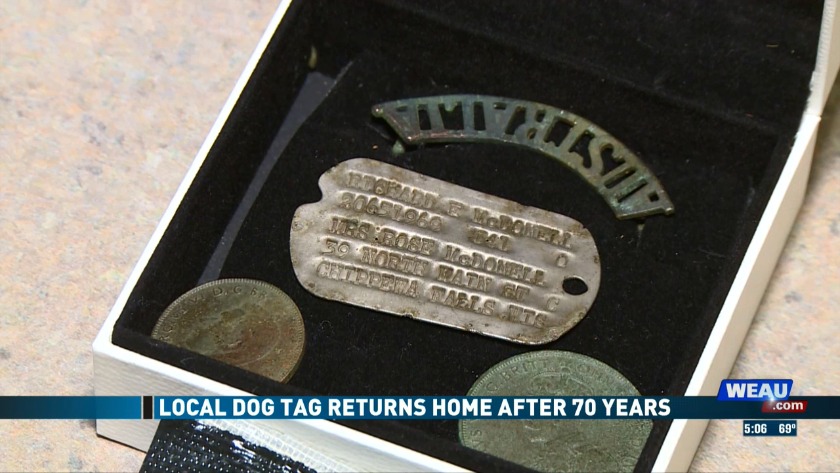 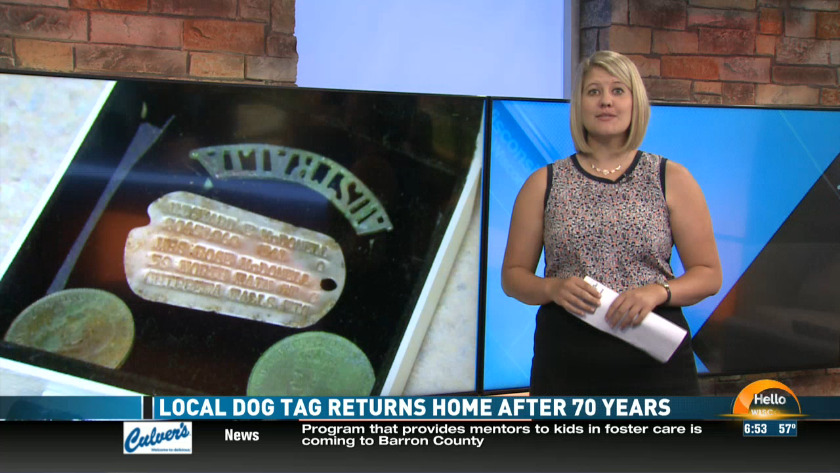 CHIPPEWA FALLS, Wis. (WEAU) -- A local woman has been reunited with a piece of family history thanks to a stranger all the way across the world. After laying in the ground for more than 70 years, an old dog tag has found its way back to the Chippewa Valley from Australia.

Dog tag belonging to Richard McDonell was returned to his daughter after more than 70 years.

What was once hidden history is now coming back to life for Patty McDonell from Chippewa Falls. Her dad, Richard McDonell who served during WWII and left something behind during training in Australia, but thanks to a kind man and his metal detector, it has now been returned to the family.

"It's not like we missed it, we didn't know that it existed,” said Patty McDonell who spent time reminiscing about her dad during this experience. "Just before he died, on his death bed he said remember the good times,” she added. Even though that was nearly 40 years ago, she now has a new memory of her dad she'll always remember.

"It came out of the clear blue, my cousin in California contacted me and said Craig Wellington in Australia is trying to contact the family of Richard E. McDonnell,” Patty said. At first Patty says she was skeptical it was a scam, but cautiously started to email with Craig Wellington who was looking to return the dog tag to the McDonell family. "I found it but it was never mine, it belonged to someone else and I know if it was my grandfather or my father, I'd like it back,” Craig Wellington said.

He found the dog tag on an old WWII training site with his metal detector. "It's very thick bush land, we sometimes have trouble getting through it, our metal detectors and gear gets hooked up in vines and branches,” Wellington said. The land was recently sold to a developer, so he decided to start digging up all of the hidden history before it disappeared. "It's an incredible feeling to be able to bring history full circle, something that would have been lost forever is now back with the family and it's a great feeling,” Wellington added.

Once he found it, he packed up and put it in the mail, even covering all of the shipping costs to send it back to Chippewa Falls. "He wrapped it so tight, I had to use a knife to open it and as I am opening it, I am shaking,” McDonell said.

And inside the box she found a little piece of her dad, brought back in her life. "It's unbelievable that there is still nice people in the world that would go out of their way to do this for somebody,” McDonell said.

What makes the discovery even more meaningful was that she never even knew he went to Australia, until now. "It's literally laid underground for 76 years and I come along, find it and now it's back with her, she's got her dad's tag back,” Wellington said. As she started sorting through old photos - she actually found a picture that was taken in Australia. "I just wish I knew more about that history but it meant a lot to Craig to see that picture taken in Newcastle, that's my backyard,” McDonell said.

The experience is pulling together pieces from the past and uniting strangers from across the world. "It's one thing to have it back but it's entirely so much more important to me that he took the time and energy and thoughtfulness to do this for people,” McDonell said.

The dog tag Craig sent back to Patty is just the beginning, he is continuing to search the area for more hidden history and recently found more history from Wisconsin. He just mailed back another set of dog tags that belong to a family in Oshkosh.

Local gym gets you "Sweatin' with your Sweetheart"

Local gym gets you "Sweatin' with your Sweetheart"