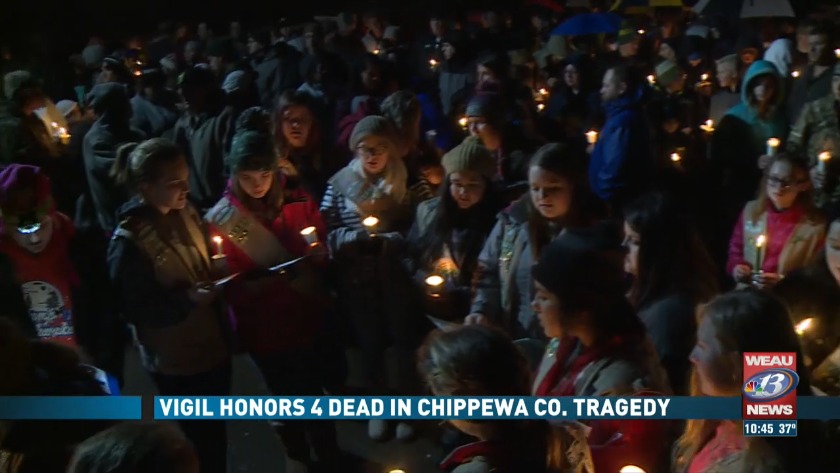 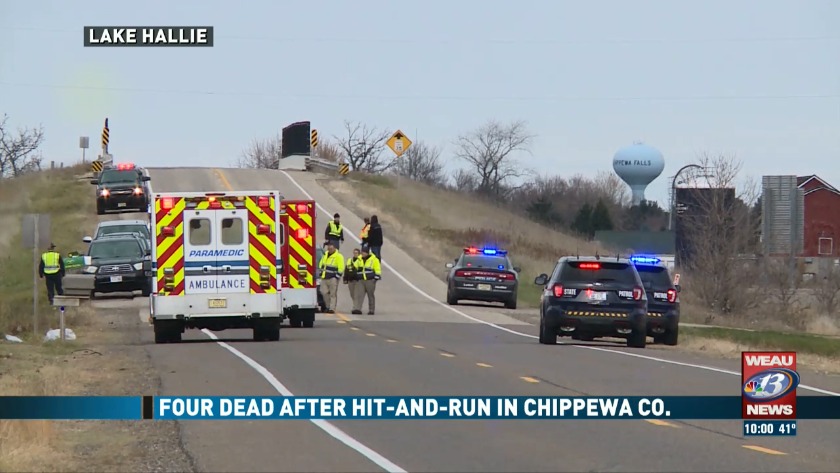 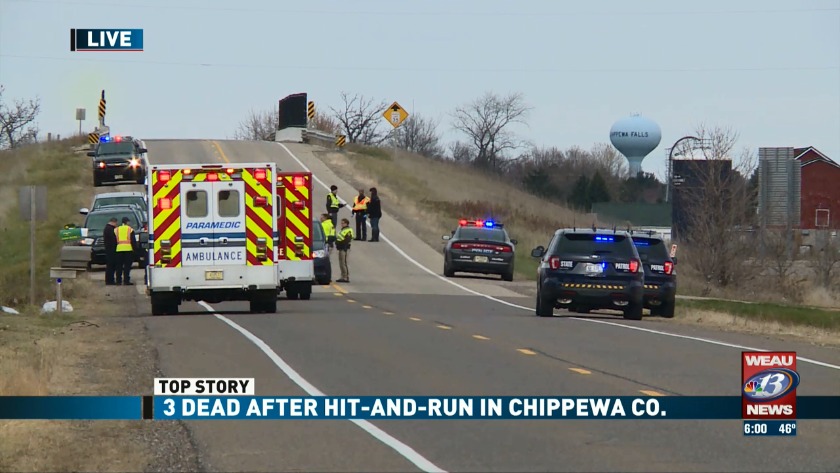 CHIPPEWA COUNTY, Wis. (WEAU) -- Bond has been set for the man accused of a fatal hit-and-run crash in Lake Hallie.

Treu is accused of huffing before a crash that happened Saturday.

The Lake Hallie Police Department says the four people killed are 9-year-old Jayna Kelley of Lake Hallie, 10-year-old Autum Helgeson, also of Lake Hallie, and 10-year-old Halee Hickle and her mother Sara Jo Schneider of Lafayette. One additional 10-year-old is still in the hospital, but they say she is reported to be in stable condition.

Treu is due back in court on Tuesday.

The Lake Hallie Police Department says the four people killed are 9-year-old Jayna Kelley of Lake Hallie, 10-year-old Autum Helgeson, also of Lake Hallie, and 10-year-old Halee Hickle and her mother Sara Jo Schneider of Lafayette. One additional 10-year-old is still in the hospital, but they say she is reported to be in stable condition.

According to police, the driver was huffing when the crash happened; it's when someone intentionally inhales chemical vapors. Colten Treu of Chippewa Falls was arrested for the crash. He faces four counts of homicide by negligent use of a vehicle and is expected in court Monday morning.

The local Girl Scout group consisted of 12 persons (5 adults and 7 children) who participating in a highway cleanup project. All members were wearing green highly visible safety vests. All members of the group were in the ditch, not on the pavement or gravel shoulder at the time of the crash. The speed limit at this location is 45mph and the roadway is straight with no obstructions. The entire group was on the west side of CTH-P just south of the STH-29 overpass bridge.

A black truck heading northbound on CTH-P veered out of its lane, crossing over the center line and left the road entirely into the west side ditch line striking 5 members of the group. The truck failed to stop and render aid, but instead left the scene of the crash. The truck was last observed heading north towards the City of Chippewa Falls.

The City of Chippewa Falls Police secured the home and garage while Sheriff’s Deputies obtained a warrant. The truck was found to be abandoned in the garage at this location and the driver and a passenger had left the house prior to police arriving.

The traffic crash claimed the lives of Jayna S. Kelley (age 9) of Lake Hallie, Autum A. Helgeson (age 10) of Lake Hallie, Haylee J. Hickle (age 10) and her mother Sara Jo Schneider (age 32) from the Town of Lafayette. One additional injured girl (age 10) is still hospitalized and is reported to be in stable condition at this time.

On Saturday November 3, 2018 at 4:33pm Colten R Treu (age 21) of Chippewa Falls turned himself in to Officers from the City of Chippewa Falls Police. The passenger in the truck turned himself in to the City of Eau Claire Police at 3:54pm on the same day. Both subjects gave statements to police which included that they had been intentionally inhaling chemical vapors which is commonly called “Huffing”, just prior to the accident.

This investigation is far from over and any persons who may have witnessed this accident are encouraged to contact the Lake Hallie Police Department. Our department greatly appreciated the assistance that it has received from neighboring jurisdiction on this terrible crash. This is a horrible reminder of our nations epidemic of self-indulging with substance abuse without regard of the consequences. Words cannot describe our Lake Hallie community’s sorrow for the witnesses, victims, and their families. This senseless crash was completely avoidable.

According to the Chippewa County jail, 21-year-old Colten Treu could face multiple charges after Saturday's hit-and-run - including hit-and-run involving death and homicide by intoxicated use of a vehicle.

The driver accused of hitting and killing three girl scouts and a mother with his truck is expected in court Monday morning.

Lake Hallie police Sgt. Daniel Sokup says 21-year-old Colten Treu, of Chippewa Falls, crossed a lane Saturday morning and veered into a roadside ditch, striking the victims. Several girl scouts and chaperones were collecting trash along a ditch on County Highway P near Webber Field. Treu sped away from the scene, but later turned himself in. Sokup says he will be charged with four homicide counts.

Police are expected to release the names of the victims and the fourth girl injured, who is still in critical condition.

The girls were fourth-graders and members of Troop 3055 in Chippewa Falls.


The community of Chippewa Falls gathered Sunday evening at Halmstad Elementary, where hundreds of people remembered the lives of the victims in Saturday’s tragedy.

“Our hearts are broken,” said Sheri Jasper, board member of the Girl Scouts Northwestern Great Lakes. “When we weep, we all weep together.”

Jasper said this tragedy comes as a shock to many, especially to fellow Girl Scouts.

“For many of them, this is something new to lose a child,” said Jasper. “They will rely on the strength of their leaders and other professionals in their schools and communities.”

Candles lit the night, songs were sung, and through the grief, hearts were connected.

“We're going through a storm as girl scouts and as a community,” said Chippewa Falls mother and former Girl Scout, Tricia Voigt. “Once a Girl Scout, always a Girl Scout."

The Chippewa Falls Area Unified School District also commented Sunday, showing their support in the midst of the tragedy..

"Chippewa Falls is a close knit community,” said Superintendent, Heidi Eliopoulos. “There are a lot of people hurting right now on behalf of our children."

CHIPPEWA COUNTY, Wis. (WEAU) -- According to the Chippewa County Jail, 21-year-old Colton Treu could face multiple charges after Saturday's hit-and-run - including hit-and-run involving death and homicide by intoxicated use of a vehicle.

CHIPPEWA COUNTY, Wis. (WEAU) -A vigil for the victims of Saturday's fatal hit-and-run is scheduled at 6 p.m. Sunday at Halmstad Elementary.

Eliopoulos confirmed another girl is in critical condition.

Eliopoulos says approximately 15 people were there at the time of the incident.

More support and services for students and staff will be available at the elementary schools Monday.

She said the names of the victims are expected to be released Monday by the Village of Lake Hallie Police Department.

CHIPPEWA COUNTY, Wis. (WEAU) -- The Chippewa Falls School District Administration and local law enforcement plan to hold a news conference at 4:15 Sunday afternoon for an update on the student tragedy that happened Saturday.

WEAU 13 News plans to bring you that news conference live on air, on our website, and on our Facebook page.

GSNWGL says cards may be sent to the Eau Claire Service Center.

A candlelight vigil is being held by the Nokomis Service Area on Sunday, November 4 at 6 p.m. at Halmstad Elementary School.

Chippewa Falls Area Unified School District Director of Human Resources & Public Relations, Michelle Golden, says the district is "deeply saddened by this tragedy." Golden adds, "hearts and prayers are with the girls and their families."

Golden says both the district and school crisis teams have put together support networks for students, staff and families.

On Monday, there will be additional counseling services available for students and staff.

One young girl remains in critical condition at this time.

A Girl Scout troop was picking up trash on CTH P near STH 29 when a black Ford F150 left the roadway and struck multiple people in the ditch.

The driver fled the area, but later turned himself in.

He is identified as 21-year-old Colton Treu of Chippewa Falls.

The Lake Hallie Police Department extends it's deepest sympathies to the families involved.

This is an ongoing investigation.

Officials say two area Girl Scouts and one adult are dead. Two other children were injured. Sergeant Dan Sokup says one victim was air lifted to the hospital and one victim was taken by ambulance.

Officials say the crash happened at 11:41AM on County P at the 29 overpass near Weber Field. The children involved were area Girl Scouts. An investigation and search for the vehicle is underway. The vehicle of interest is believed to be a black or dark grey Ford F-150 '04-'06 with heavy front end damage and missing both side view mirrors.

Officials say the crash happened at 11:41AM on County P at the 29 overpass near Weber Field.

The Lake Hallie Police Department is leading the investigation but multiple crews responded to the scene, including the Chippewa Falls Police Department, Chippewa County Sheriff's Department, Wisconsin State Patrol, and other EMS and fire personnel. Emergency helicopters were also flown in to assist.

Anyone with information on the crash is asked to contact the Chippewa County Communications Center.

We’ll have updates on the incident as information comes in.