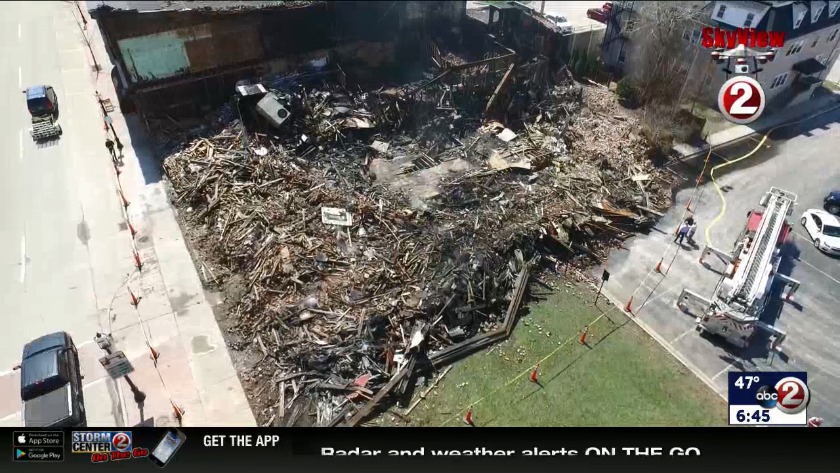 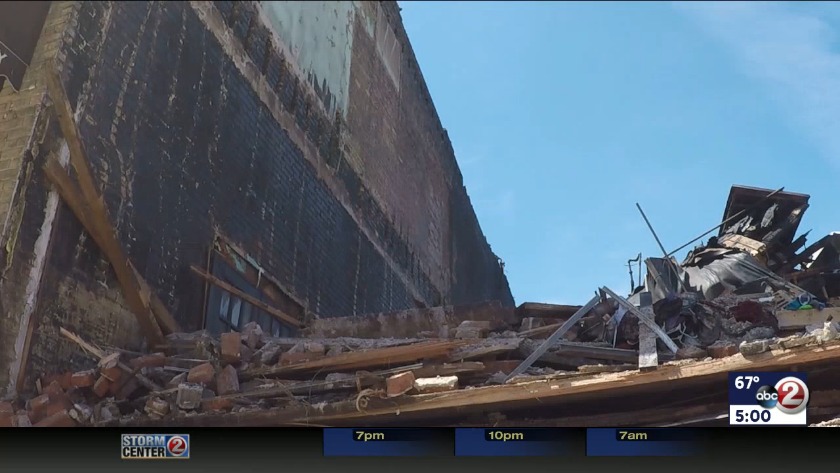 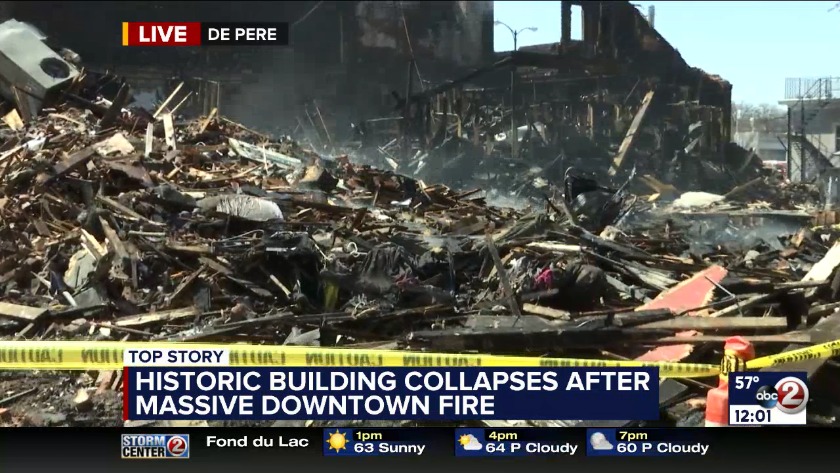 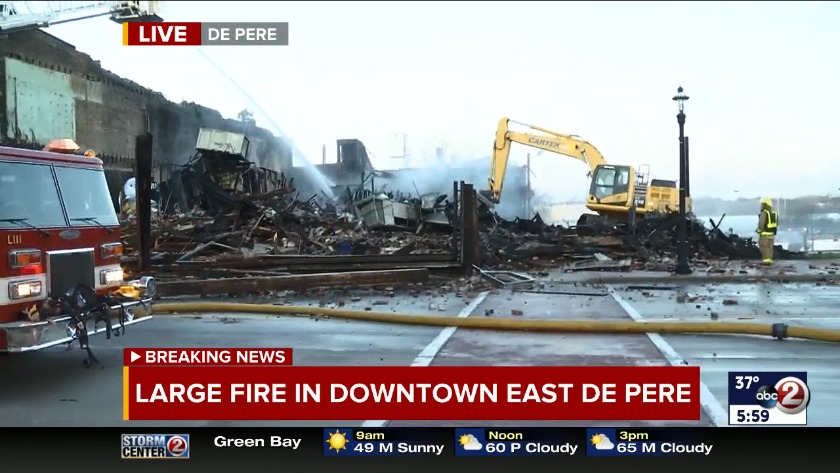 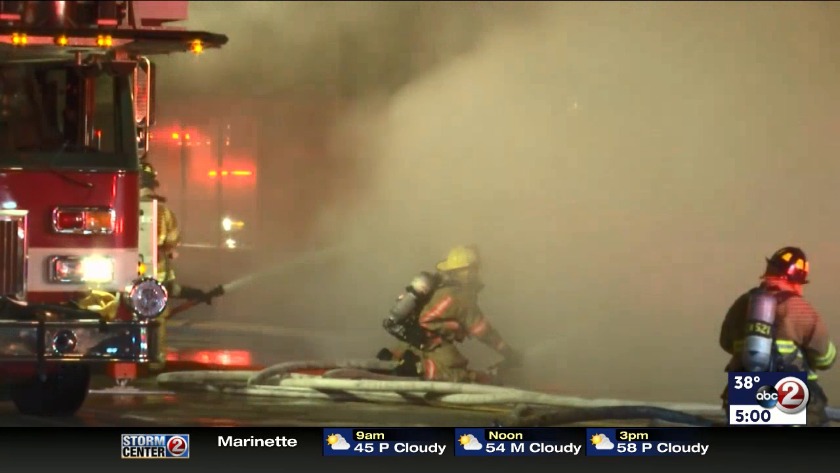 De Pere Fire Chief Alan Matzke says the firefighters responded to the building at 100 S. Broadway at about 12:30 a.m. They found heavy smoke in Ogan Restaurant on the the first floor..

"As residents began to wake up, alert each other, law enforcement arrived on scene. Law enforcement assisted with those evacuations. They were able to assist most of the people out," says Chief Alan Matzke. "By the time fire department arrived on scene we had a report that we potentially still had people trapped. We did not find anyone trapped. We were able to clear that building and ensure everyone's out. So at this point, all residents are accounted for. All residents are safe."

About 20 residents escaped without injury. People were also able to rescue their pets.

As crews started to fight the fire, the ceiling partially collapsed.

Firefighters pulled out of the building and have been working to keep the flames from spreading to the entire block.

"Fire was extensive at that address, at that restaurant, but our crews made the interior attack. The ceiling began to degrade and fall upon them. So they had to withdraw from that fire attack and we began to set up a defensive operation where we tried to protect the building next to it. That's the one that's currently still standing," Matzke says.

Matzke says the building is more than 100 years old, and that presented a challenge for firefighters.The fight stressed the city's water system.

"Initially, we were drawing so much water that we were depleting the city's water system and we were hitting all the hydrants in this downtown area," Matzke says. "We were flowing thousands and thousands of gallons a minute initially. And the system really couldn't keep up very well. So our Plan B, we moved vehicles down to the river. We had three trucks down there pumping water out of the river to feed this operation."

The building eventually collapsed and is now rubble.

In addition to the restaurant and apartments, the building also housed Turba-Schroeder Photography and XO Fitness.

The Ogan Restaurant website was updated to say, "A terrible fire has destroyed Ogan Resaturant. We are completely sad that our baby is gone. We want to acknowledge the heroic actions of the Firemen who risked their lives to get everyone out of the building and keep this terrible fire from spreading further."

Nielson thanked the firefighters, and spoke about how much she loves the community of De Pere.

"When I saw it, it was really a sad day," says Mayor Mike Walsh. "This is a very historic, old building. Unfortunately when we have those kinds of buildings, it doesn't take long for them to go up when there's a fire. It's just a shame. I feel for the owner. I feel for the people who are leasing through that building and the ones who live in there."

The mayor says at least three buildings south of the scene were evacuated out of caution.

S Broadway reopened to traffic at about 8:45 a.m.

The cause of the fire is under investigation. There's no dollar amount on the damage at this time.

The building suffered a similar fate 137 years ago. It was on April 23 in 1882 that fire destroyed buildings in the 100 and 200 blocks of N and S Broadway, according to a city website.

Fire crews are on the scene of a large fire in downtown East De Pere.

Fire crews were called to the corner of South Broadway and George St. at about 12:30 Wednesday morning.

Broadway is closed in both directions between William Street and and Main Avenue.

No word on any injuries, or what caused the fire.

Action 2 News has a crew on the scene and we'll keep this story updated.

A different perspective from the fire in Dowtown East De Pere. @WBAY pic.twitter.com/DbJX0mx6IM

TRAFFIC ALERT: Broadway (Hwy. 32/57) is closed at William St. on the east side of De Pere because of a fire at Ogan Restaurant. Officials are detouring traffic via Wisconsin, George, Webster, and Ridgeway. Road could be closed for hours. #TimesaverTraffic pic.twitter.com/HIhVVkvfZl

Just spoke to the owner of Ogan who says she owned it for 10 years. She's understandably very upset. There were several other businesses in the building too including a photography studio and a yoga studio. @WBAY pic.twitter.com/hGf2bw3H1D

#breaking Still In scene of a historic building collapse in Downtown East De Pere. I’ve been here since about 1:30 a.m. There is nothing left. Live reports from @AishaLMorales and I all morning. @WBAY pic.twitter.com/Oix7iexH25

Read the original version of this article at wbay.com.

Donations can be made at the college Bursar Office, Todd Wehr Hall 128, weekdays between 8 a.m. and 4:30 p.m. All funds will be used to provide support for these three members of the St. Norbert community. Make checks payable to St. Norbert College.

McGeorge's bar fundraiser for Chelsea Dura, who lived in the apartments and works for McGeorge's.

GoFundMe for Amanda (click here), a yoga instructor who lost everything in the fire and has a pet. We're told the GoFundMe account was started by her employer.

Related Stories
The comment sections of our web set are designed for thoughtful, intelligent conversation and debate. We want to hear from the viewers but we are not obligated to post comments we feel inappropriate or violate our guidelines. Here are some of the criteria you should follow when posting comments: