Foxconn move in Eau Claire a boost for local business 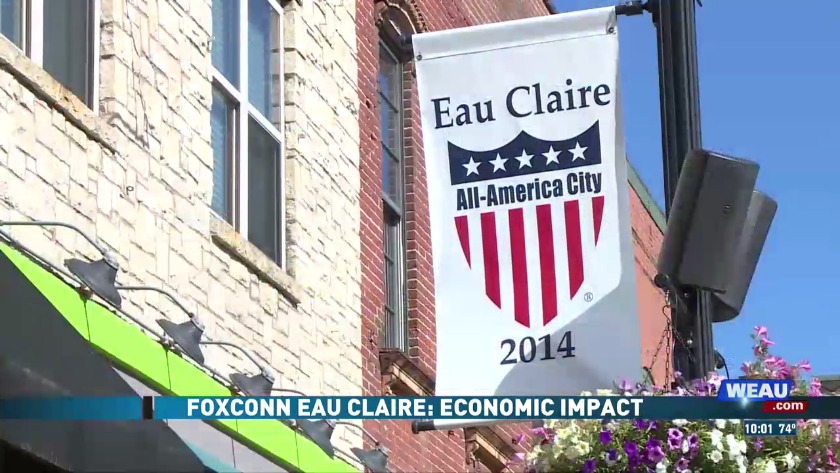 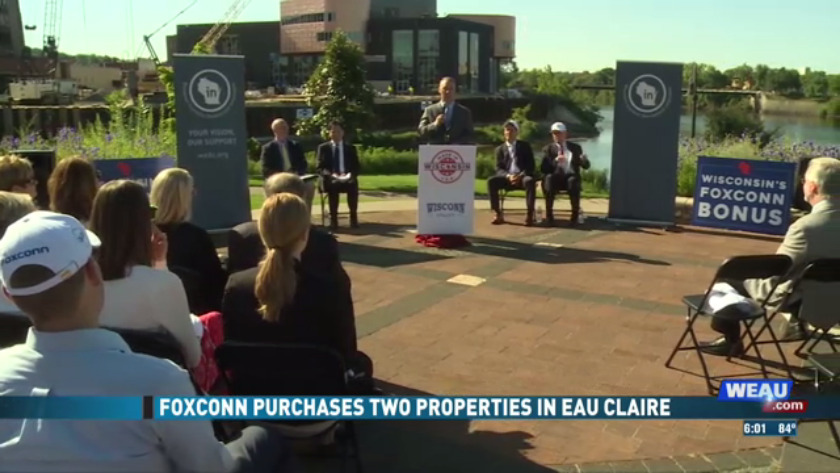 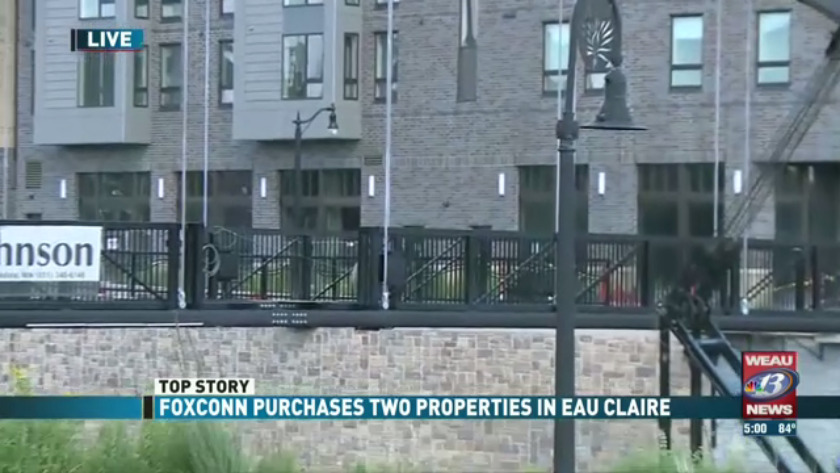 EAU CLAIRE. Wis. (WEAU) -- If you took a walk in downtown Eau Claire on Monday, you would’ve heard a mix of soprano sax and jackhammers.

“Now you go to any part of downtown, you're usually seeing some cranes. You're seeing three to four story buildings, were before they might have been just two stories," Eau Claire Economic Development administrator Mike Schatz said to WEAU 13 News on Monday. "The roadways have all been improved to make it easier for traffic, the bike lanes have been expanded more park space.

“So the landscape is dramatically different than let's say 10-15 years ago.”

Foxconn will soon join others who've set up shop downtown. At a press conference in Phoenix Park on Monday, it was announced that the Asian tech giant has entered into an agreement to buy part of the space in Haymarket Landing and fully take over the six-story structure at Graham and E. Grand Avenues.

The move was one which came rather suddenly. Schatz said he was first told of the move last Friday, while David Minor, president of the Eau Claire Area Chamber of Commerce, said he learned of the details right before Monday’s press conference.

"This is a company that any community would want, because they're coming in and buying,” Minor said to WEAU 13 News on Monday. “They're coming into going to set shop up here and they have not asked for anything."

Tech jobs coming to Eau Claire is nothing new, but it hasn't always come with perfect results.

Steve Chen launched his company SSI in the 1990's, after breaking away from Cray Supercomputers in Chippewa Falls. The company ultimately collapsed, when IBM pulled its funding. Tech firm Hutchinson Technology was dealt a series of job cuts, before it merged with TDK in 2015.

Schatz doesn't call these moves "flops" and says lessons were learned from these cases.

“You know, with any high-tech company, you realize that technology changes very rapidly. We've seen that some companies are only in business for short times and then something new in that industry takes over,” he said. “So you don't want to be tied to anyone single industry, like in the tire company days (when Uniroyal operated in Eau Claire) and we've diversified quite a bit. So, we feel comfortable there.

"There are no for-sure things in high-tech anymore. You know, you've got to have all the other amenities and all the other things going for you in a community, in case their business plan doesn't work out."

Monday's announcement by foxconn calls for 150 new jobs to come to downtown Eau Claire, but Minor said economic growth does not stop with just those 150 positions.

"Double it, because most will have significant others - wifes, spouses. Now you're talking 300. If half of them have children, that's going to add to our to our K-12 system."

Minor confirmed to WEAU 13 News that two downtown businesses contacted him soon after Monday’s announcement, asking how to help Foxconn be more of a permanent fixture.

"Everything I've seen from Foxconn so far in the state, they want to be a willing partner,” he said. “They want to go to work with not just a community, but the area and the business and the people that already exist in here. They don't want to put anybody out. They want to be a working partner."

Big news for Eau Claire as Foxconn announced it is purchasing two properties in the downtown area.

Governor Walker and Foxconn officials made the announcement at Phoenix Park, Monday.

Alan Yeung, the president of FEWI Development Corporation at Foxconn, said, “This announcement reinforces our commitment to Wisconsin and to the United States in terms of not only electronic manufacturing but also innovation and also talent development.”

He explained, “To have Foxconn Place Chippewa Valley right here in the middle of the midst of the Confluence, as you can see the work being done here behind, it's an exciting time. It's an exciting opportunity and we love the idea for startups, for talent attraction, for supply chain, for all those reasons it's a great spot for Foxconn to have an anchor to connect it with operations all throughout the state.”

Foxconn says it is purchasing a six-story office building on Grand Avenue as well as the majority of the first floor at Haymarket Landing.

Governor Walker added, “We couldn't be more proud that Foxconn selected Wisconsin because we were ready. We're ready in every part of the state and the Chippewa Valley, and the momentum of the west region is a big part of that.”

However a small group of protesters at the event said they don't want Foxconn to come to the Chippewa Valley.

Protester Ben Orlikowski explained, “I don't like Foxconn because of the way they treat their workers and the way they exploit their resources, especially Wisconsin's pristine waters and land we have here.”

He added, “They have a track record in Taiwan of pushing workers to the point of suicide through low wages and poor working conditions and working them past legal overtime limits. That includes children as young as 14-years-old.”

However Foxconn said that isn’t the case.

Walker said the announcement comes just three weeks after he and Foxconn announced plans for a similar Foxconn place in Green Bay.

Gov. Scott Walker was in Eau Claire Monday morning to help make the announcement with Foxconn officials in Phoenix Park.

Company officials say the goal of the purchase is to create a technology hub that will serve west-central Wisconsin.

Foxconn has also purchased over 15,000 square feet of co-working space at 200 Eau Claire St., in Haymarket Landing, which is a part of the Confluence Project. Foxconn will use this space as a center that will be part of a talent and innovation network for the AI 8K+5G ecosystem that Foxconn is creating in Wisconsin, and in the U.S.

The company has entered into a definitive agreement to acquire ‘The Grand’, a six-story building at 204 E. Grand Ave. in downtown Eau Claire.

It’s projected to create 150 high-tech jobs in the area.