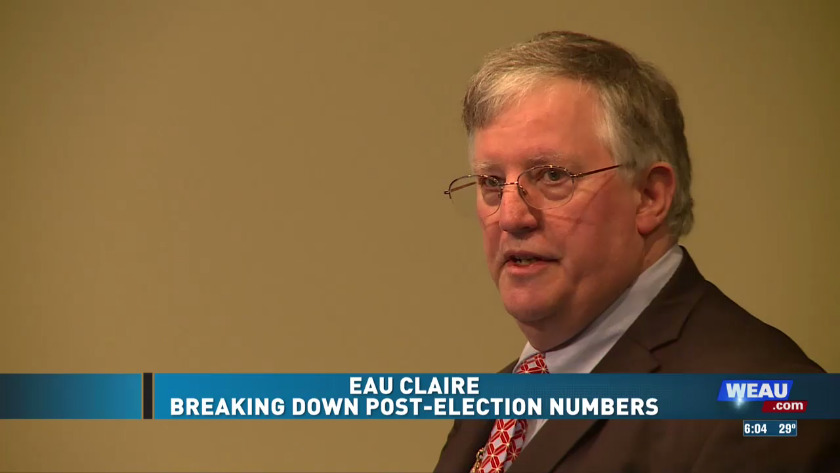 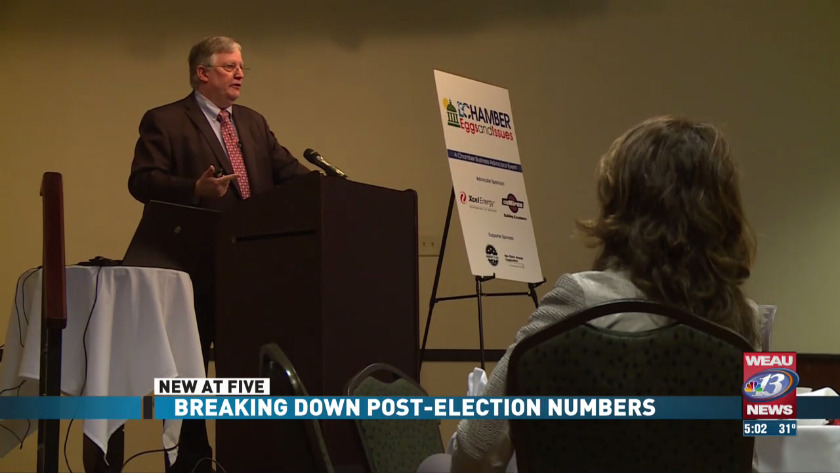 The director of the Marquette Law School poll was the guest at Friday’s “Eggs and Issues” breakfast from the Eau Claire Area Chamber of Commerce.

“Today, I've heard quite a bit about high-speed broadband for communities that then areas that don't have it,” Franklin said to WEAU 13 News on Friday. “That's something we've asked about in the polling, so I know that it's an issue. But, to hear people spontaneously bring it up and say it's high on their list of concerns, that's something that's really helpful for me to hear.”

It’s been nearly two weeks since voters went to the polls and Franklin has been taking his findings on the road. He made an appearance in La Crosse on Thursday ahead of Friday’s stop in Eau Claire.

"Post-election is a busy time, because you want to find out what actually did happen, how did counties and cities vote and what shifted,” he said. “All of that leaves a period right after the election to be pretty busy looking at that.

"I have to tell you I'm a guy that loves to drive the back roads of the state. So, to have an excuse to drive up here off the interstate was just fabulous ... It's just nice to talk to people in places that I don't live and then I get to hear what they think about things and what issues matter to them."

The final MU Law poll released before the midterm election accurately called for a tight governor's race – one by Democrat Tony Evers – as well as a strong win for U.S. Sen. Tammy Baldwin. However, one trend hidden in his maps involved more-urban counties moving more Democrat and more-rural counties moving more Republican.

“If you just look at how counties voted, it’s a pretty familiar-looking map. The eastern half of the state, including the Milwaukee suburbs, but up to Green Bay and then over through the north, are very Republican,” he said. “They’re pretty red, but they're less red than they were four years ago. That doesn't mean we're reaching a tipping point, but it does raise some questions.

"That's both a regional difference, but it's also where population centers are, because where the bigger populations are in the north like St. Croix County or Eau Claire, we saw movement in a Democratic direction."

Franklin said this could impact government bodies well beyond Washington – or even Madison.

"The regional divide, or the divide between bluer towns and redder areas surrounding those towns, is a big question for us going forward,” he said. “It's even a question for county government, when you think that maybe your county is more sharply divided between the more urban areas and the more rural areas around it."

With another election done and the next presidential contest less than two years away, Franklin continues to gauge the pulse of Wisconsin, even as he headed back to Madison later on Friday.

"… but I think I'm going to take a back road down there. I'm not going to do the interstate either," he said.

Teen charged in crash that ejected passenger into river