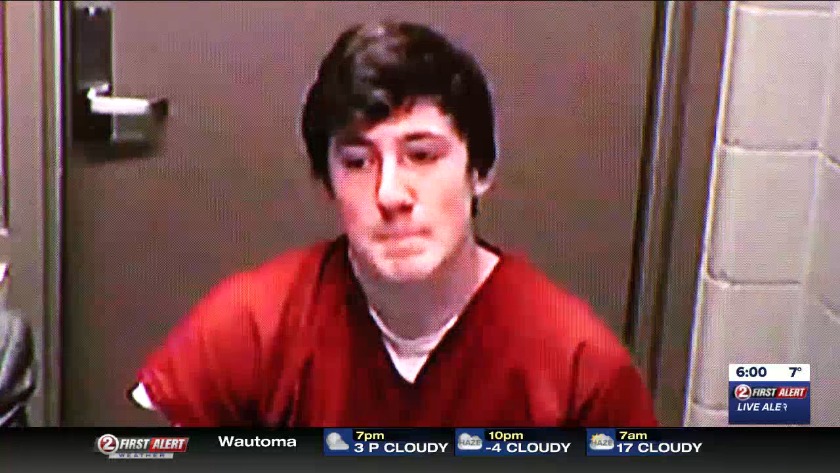 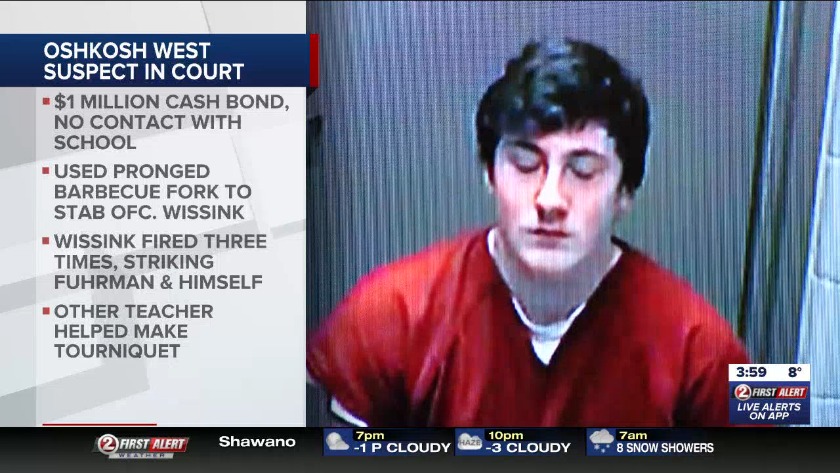 Action 2 News has obtained an affidavit in support of a criminal complaint for Grant Fuhrman. The charge alleges Fuhrman "attempted to cause the death of Mike Wissink, with intent to kill that person."

He must provide a DNA sample at the jail, and he can't have any contact with Oshkosh West High School or a number of people identified by the court.

The complaint states Fuhrman used a pronged barbecue fork to stab Officer Wissink several times and he expected Wissink to be unable to fight back.

Winnebago County District Attorney Christian Gossett praised the officer's response. "Officer Wissink couldn't have done anything better than how he did things. It's just amazing, his present sense of awareness and his ability to handle the situation, contain the situation and keeping it from turning into something much more traumatic."

Events unfolded at about 9 a.m. on Tuesday, Dec. 3, in Officer Wissink's office at the school located at 375 N. Eagle St.

Officer J. Gogo, a school resource officer at Oshkosh North, was the first to arrive at the scene. He responded after hearing cries of "I need help now!" over a police radio. Gogo said he knew it was Officer Wissink's voice.

Gogo entered Officer Wissink's office and found Grant Fuhrman "laying on his stomach and Wissink was over Fuhrman." There was a tourniquet on Wissink's left arm.

“Gogo I was just talking to him and he [Fuhrman] started stabbing me," Wissink told Officer Gogo.

Under Wissink's chair was a barbecue fork with two prongs, about 8-10 inches long.

Fuhrman told police that he waited for Officer Wissink to be alone in his office that morning before the stabbing.

Fuhrman told investigators that he thought Officer Wissink would not be able to fight back and that the officer would "pass out or bleed out within a couple of seconds."

The teen told investigators he didn't know why he wanted the gun or what he was going to do with it when he got it.

The struggle continued. At some point, Officer Wissink fired three times. He hit Fuhrman once. Wissink shot himself in the arm once. Fuhrman said he tried to run out of the office but Wissink prevented him from escaping.

Levine ran into the office and saw the officer struggling with Grant Fuhrman. The teacher said "there was blood everywhere and a lot of it." Wissink yelled for the teacher to call 911 and get a tourniquet.

"Levine stated that he heard Fuhrman ask if he had been shot and when he looked at Fuhrman he looked scared and had wide eyes," reads the complaint.

Levine used his belt and wrapped it around Wissink's left forearm for a tourniquet.

Both Wissink and Furhman were taken to a hospital for treatment. Fuhrman was released and booked into the Winnebago County Jail.

Wissink was released from ThedaCare Regional Medical Center-Neenah Dec. 9. Police from across the area gave Wissink an escort back home to Neenah. CLICK HERE for full coverage of the community's welcome home for the officer.

Furhman agreed to talk with investigators after the incident. The teen explained that he had been "taking Adderall since kindergarten" but stopped taking it his sophomore year. He started the ADHD medication again about two-to-three weeks before Dec. 3. The teen said he was having "weird" thoughts that began on the evening before the incident.

Grant said instead of going to class, he walked to Officer Wissink's office. He waited until an assistant principal leave the office so they would be alone.

Wissink told investigators that Fuhrman had come into the office that morning asking him about his case. The teen had been arrested for an incident involving a BB gun. As Wissink turned to the computer on his desk, he felt a "blow and his 'head got rocked.'" He saw Fuhrman's arms "flailing" at him. Wissink got to his feet and realized that Fuhrman was stabbing him.

Wissink said he tried to pull his Taser but couldn't reach it, so he drew his gun. He said Fuhrman only stopped stabbing him when he fired his gun. The officer believed the teen was trying to kill him, according to the complaint.

"Wissink stated that he had a good relationship with Fuhrman before this incident and teachers had told him that Fuhrman regarded his office as a safe place," reads the criminal complaint.

The Wisconsin Department of Justice Division of Criminal Investigation is leading the officer-involved shooting investigation. State law requires an outside agency to investigate a shooting involving a member of law enforcement.

DCI will give their finished report and recommendations to the Winnebago County District Attorney's Office.
.