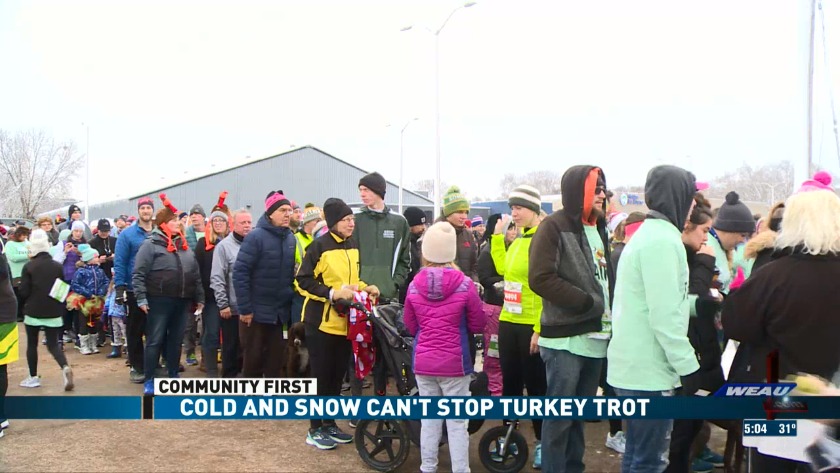 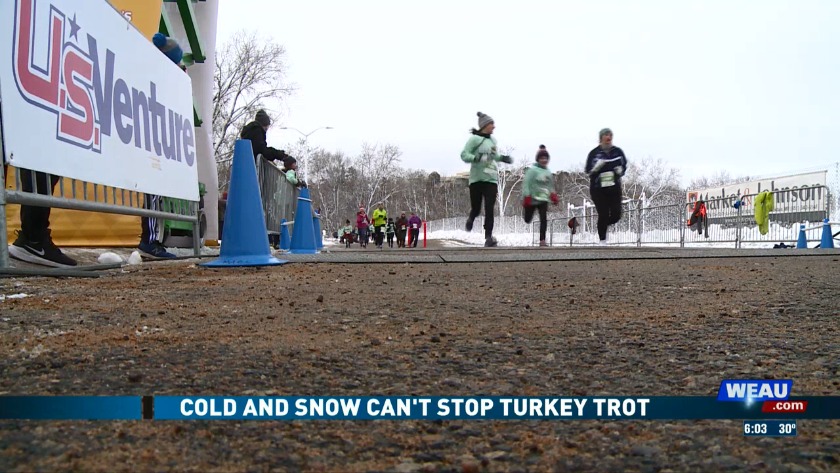 EAU CLAIRE, Wis. (WEAU) - The annual Thanksgiving Day race is one of 10 sponsored by Festival Foods in Wisconsin.

The other locations are Janesville, Madison, the Coulee Region, Marshfield, Green Bay, Appleton, Oshkosh, Fond du Lac and Manitowoc. The race benefits the YMCA and Boys and Girls Clubs in each area.

The snow and cold weather did little to keep turkey trotter’s home this morning. Hundreds of people decided to start their turkey day off with a little exercise. One of those was Dale Weibel of Eau Claire, who donned a turkey costume for the race.

“My wife actually made it. The kids used to wear it during Halloween and everything,” Weibel said. “I just inherited it and put it on. It's the 6th year that we've done the walk with our dog

Matt Lindsay of Eau Claire also had a turkey costume on.

“I got this suit for Halloween and I thought, 'wow what a great Halloween costume, also I can wear it for the Turkey Trot,' so I could use it for two purposes because it was kind of a steal.”

While most participants were bundled up, some took a more minimalist approach.

“We decided to do it shirtless, we had a pact because it's harder, it's uncomfortable and we wanted to go through that,” Kyle Sluga said. He and a group of friends chose to run the five mile course shirtless.

However Race Director Jamie Hoover said the event is much more than a run.

“It's the first year, in a bunch of years that we have snow as an inclement weather variable,” he said. “Yes we have the extra snow and extra cold this year, but everyone is still coming out, numbers are right where they are supposed to be, its 100% a community holiday.”

As for the runners, some decided to really get into the thanksgiving spirit.

“This race continues to grow every year and I think that speaks volumes to our community,” Hoover said. Creating a nice family tradition to come out and burn some calories before you put them right back on.”

After the race the runners had a sweet prize waiting for them.

“One thing that all participants also get, is a five inch upper crust Festival Foods pumpkin pie, it's phenomenal,” Hoover said.

According to officials, 30,000 pumpkin pies where handed out at Turkey Trots across the state.

Some, like Jacob & Bethany Talledge, said they keep coming back because it is something they have done with their families for years.

“We came back from Rhinelander and participated in the turkey trot with the family,” Jacob said.

“It's something his family has been doing together for six or seven years so we walk it together and it is fun,” Bethany said.

Despite the weather, Hoover said it was a great turnout.