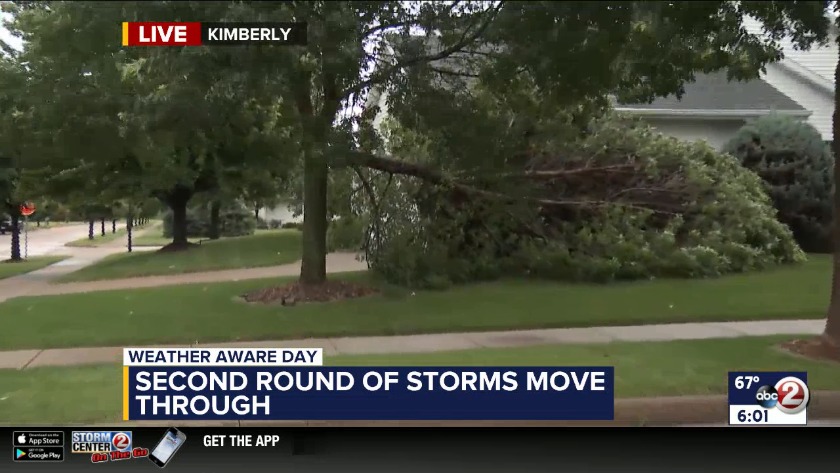 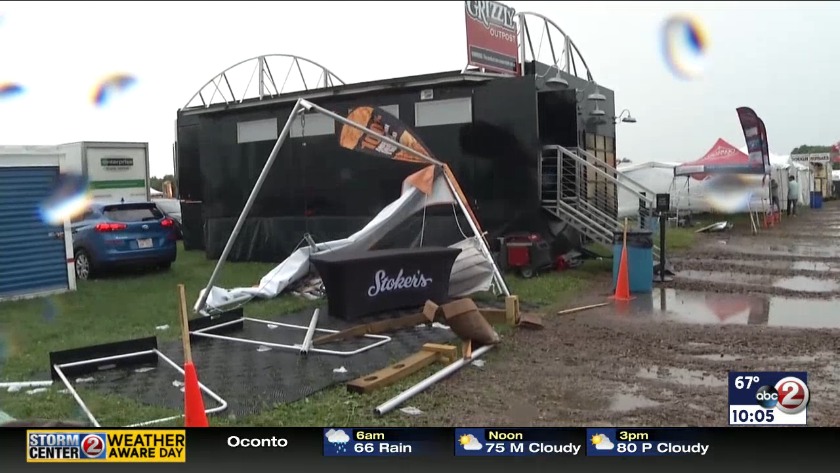 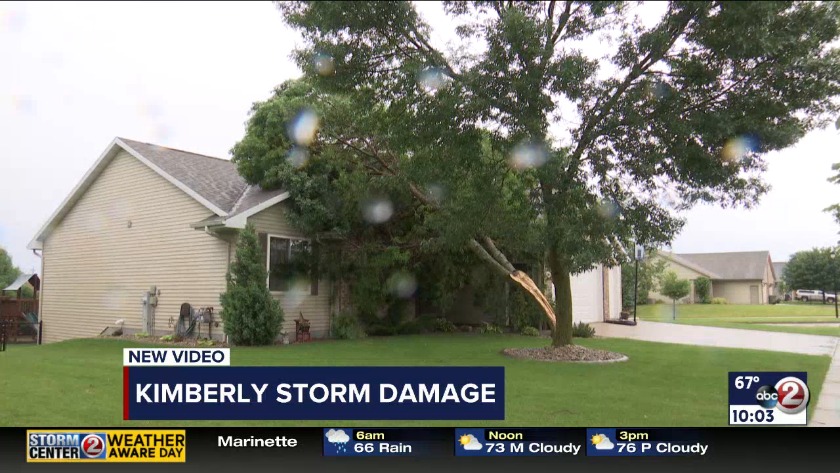 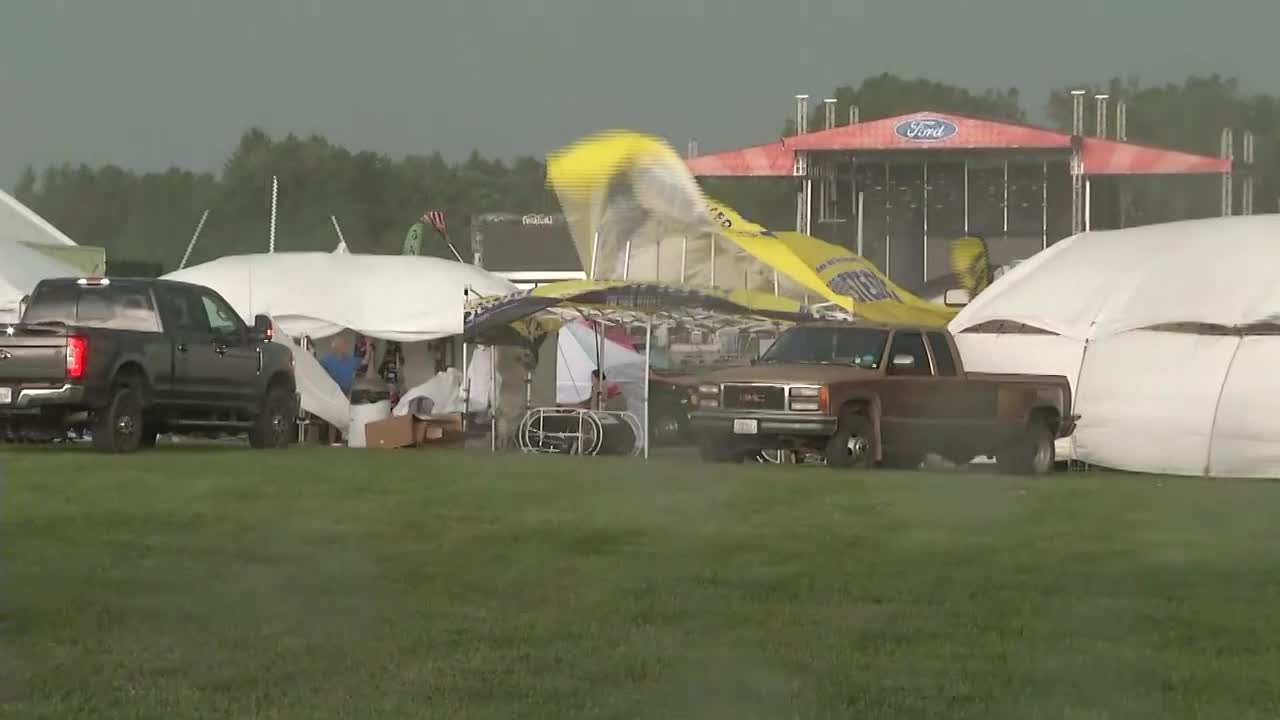 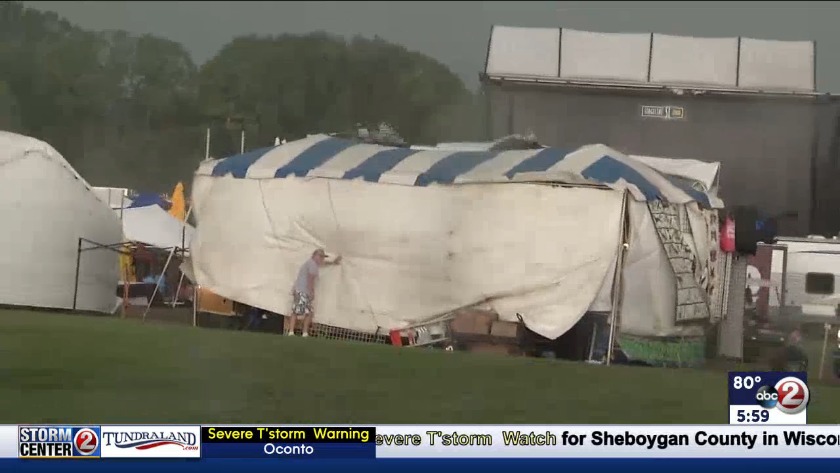 OSHKOSH, Wis. (WBAY) - The storms that passed through Northeast Wisconsin late Thursday afternoon caused an evacuation and the suspension of activities at the Country USA music festival in Oshkosh.

In front of a toppled tent, the video screen at Country USA warns people about severe weather during the evacuation on June 27, 2019 (WBAY photo)

The storm brought wind and heavy rain that sent fans near the stage running for cover, some towards vehicles, others towards the campground.

"We were just sitting, and the sky turned just black, just black," Austin Lynd from Clinton said, "and all of a sudden we were like, OK, it's time for something to come through, and we stopped and picked up all of the stuff... It got bad for a little bit but, hey, that's part of Wisconsin."

Law enforcement was prepared for the scenario.

"We evacuated out of the festival grounds, had everyone shelter in place, and then the people that didn't have anywhere to go sheltered in place in the expo center up here," Winnebago County Sheriff's Lt. Tim Dallenogare said.

A number of tents were blown over as well as pieces of equipment that weren't tied down.

"You have tents and pop-ups and stuff, but I think everybody made it through alright," DJ Waller from Janesville said.

CountryUSA revised the lineup for Thursday night after shutting down the stage for almost two-and-a-half hours. Music resumed with Neal McCoy, followed by Trace Adkins and Cole Swindell. Alabama was scheduled to take the stage at 11:30 p.m.

Fans said they didn't mind the delay, and some told us they planned to get wet. Waller told us the rain wasn't going to ruin his fun at the country music festival. "Not at all," he told us. "Never will. No, no, no. Hey, we all get wet."

There was damage from the wind throughout the area. Viewers sent us photos of downed trees in Neshkoro and Fox Crossing.

We talked with a Kimberly man who came up from his basement after the storm to find a big tree knocked down in his front yard.

"About ten minutes later I came up just to take a look at things, and I went outside to get the For Sale sign out of the front of the yard, and when I turned the other way to come back into the garage I noticed our tree was down," Chuck Manteufel said.

The storms knocked out power to about 57,000 homes in the eastern half of Wisconsin. By 10 p.m. that number was cut almost in half to about 30,000. Most of the outages were south of WBAY's viewing area, with the bulk of them in Milwaukee and Waukesha counties.

There were still several hundred homes and businesses in Dodge and Winnebago counties in the dark, with much smaller outages scattered across Northeast Wisconsin.