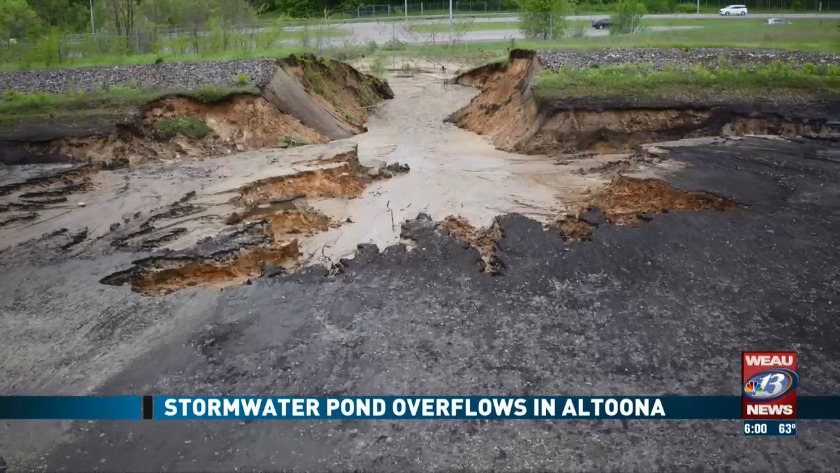 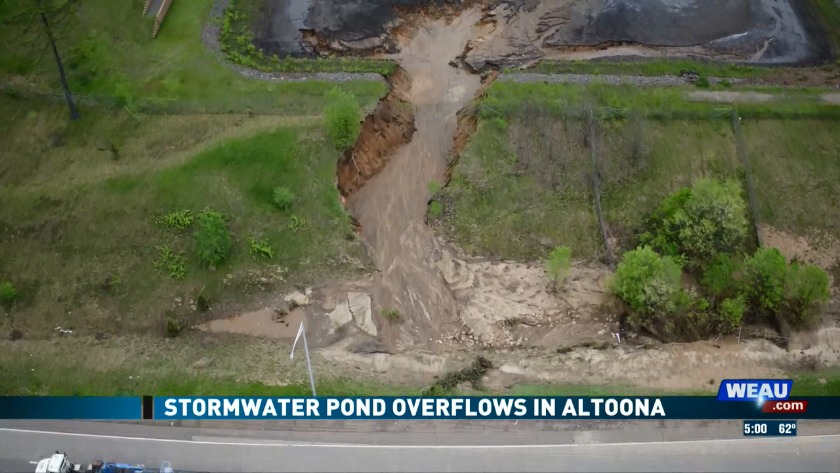 ALTOONA, Wis. (WEAU) -- The mayor of Altoona has declared a state of emergency after the relentless rain on Monday caused major damage to a storm water pond in Altoona. After the pond reached capacity, the water broke through the side and rushed out onto the Highway 53 bypass.

Stormwater pond in Altoona fills to capacity and overflows after Monday's relentless rainfall.

A majority of the storm drains throughout the city of Altoona all comes to a pond that is located between South Willson Road and the bypass. But the nearly two inches of rain that fell on Monday proved to be too much for the pond and now the it's empty with a gaping hole in the side. "Nature has a way of finding its own outlet,” said Dave Walter, the Altoona City Engineer.

The relentless rain on Monday was just too much for the storm pond. "It reached capacity, overflowed and blew through the berm at the side of the pond,” Walter said.

The storm pond was built nine years ago and serves as a major outlet for storm drains throughout the city. "It's intended to address storm water quality, remove materials prior to storm water entering Otter Creek so it does handle the bulk of the city of Altoona,” Walter added.

But with garbage, cans and bottles also ending up in the pond, the city engineer says it may have plugged the main outlet and contributed to the overflow. "Obviously when you have an incident like this that's a bad day but in general the theory behind it is to capture the water here and let it slowly decrease out into their normal water runoff versus having a lot of street flooding,” said Tyler Esh, the Eau Claire County Emergency Management Coordinator.

But when the water rushed out of the pond it went right onto the highway 53 bypass, where they had to temporarily close some lanes on Monday evening. "When crews were out here trying to clean up the debris quickly and redirect water as best as they could to limit the issue on the highway,” Esh said.

Leaving what was once filled with water, now an empty mud pit. "It was really high probably the highest I have seen it here the last week or two, something like that but then it was a real shock to look out and see nothing out there at all,” said Rodger Pomplun who lives across the street from the pond.

No one was injured during the incident and now the city is working to get the pond fixed as soon as possible. They will be holding a special city council meeting Wednesday at 2:30 p.m. to discuss how to pay for the repairs of the stormwater pond.