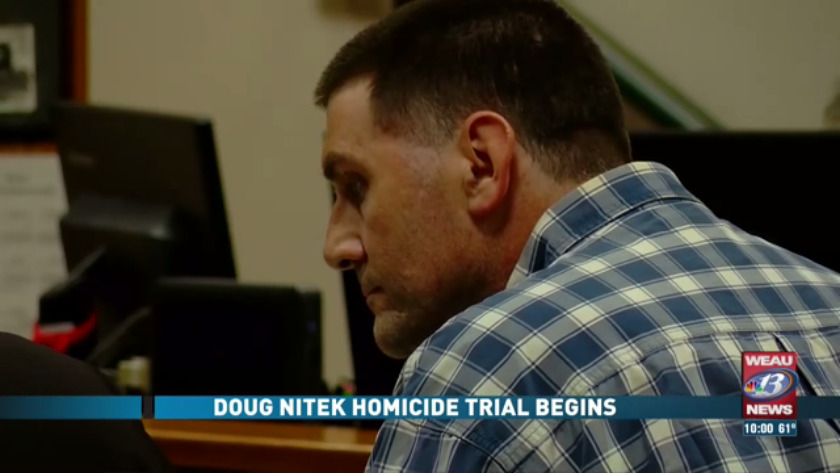 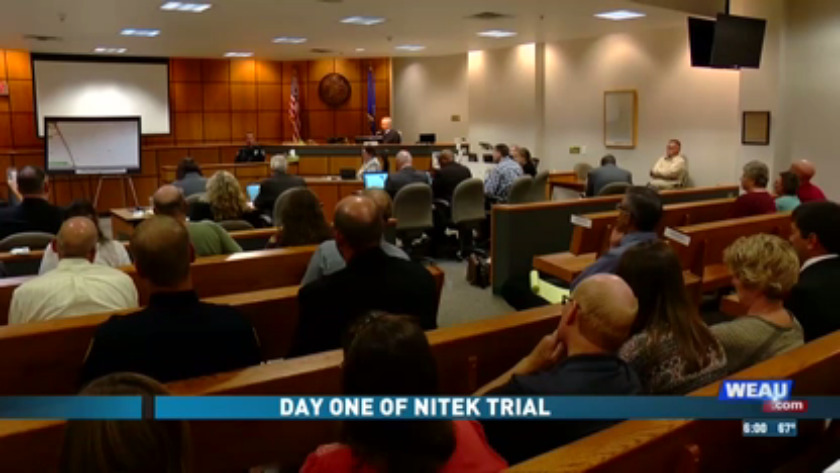 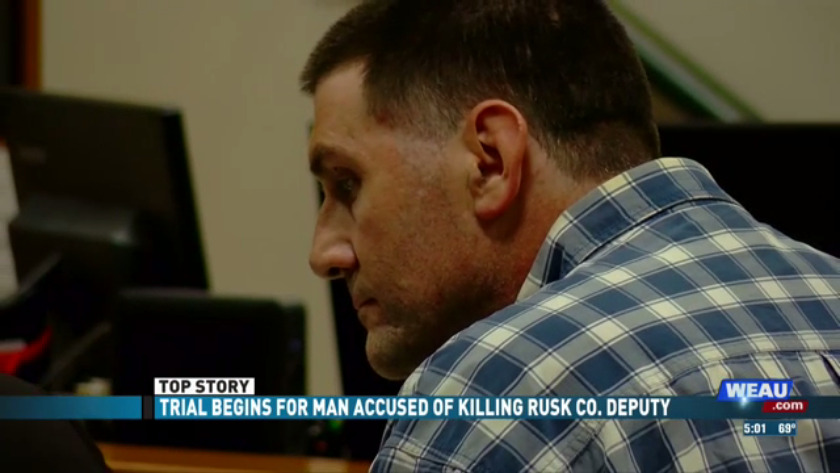 The voice of the Rusk County Sheriff’s deputy was heard inside a Dunn County court room Tuesday, as part of a call he made back to fellow deputy Gina Olson in dispatch center on the night of Oct. 29, 2016.

“110 Rusk County. Suspicious vehicle,” Glaze is heard to say in the recording. “Out on Broken Arrow. Probably just a half-mile from 2-7.

This was the first instance of a reported issue on the property of Doug Nitek – the man accused of shooting and killing Glaze later that night.

It was a portion of a nearly 6-hour recording of law enforcement communications entered in as evidence in Tuesday’s first day of the trial against the 45-year-old Nitek. He is facing 31 counts connected to the shooting death of Deputy Glaze.

A jury of 15 people from Rusk County – 10 women and five men – began being inundated with details from the prosecution surrounding the events of Oct. 29, 2016. This included, at times, graphic descriptions of the wounds and deteriorating physical condition of Deputy Glaze. Several of the law enforcement officials who took the witness stand Tuesday identified Glaze having “a massive head wound” and slumped in the driver’s seat of his squad car.

In opening statements, the prosecution worked to show jurors that Nitek’s intent was clear that night.

“The defendant, Doug Nitek, chose to murder Dan Glaze,” Amber Hahn, an attorney for the State of Wisconsin, said Tuesday. “Each action was a choice.

“He steadied the rifle. He aimed the rifle, putting the target – the driver’s side of that squad car – into the crosshairs. He made sure the safety was in a firing position and he pulled the trigger.”

When it was time for the defense’s opening statement, however, attorney Charles Glynn said part of the defense’s case will be to call into question some of the decisions made by law enforcement, including Deputy Glaze himself.

“There’s no offense meant by that, but it’s our obligation,” he said to the jury. “It’s our Constitutional obligation to defend Mr. Nitek and to ask those questions.”

‘I’m not going to sit here and try to tell you Doug is going to be awarded with the Ladysmith or Rusk County ‘man of the year’ or ‘citizen of the year’ or the Jaycees are going to honor him with something. He’s made some really bad choices in his life … but that doesn’t take away those rights that we talk about in the Constitution.”

Some of Tuesday’s most dramatic descriptions from that night came from Officer Robert Stolp with Ladysmith Police Department. He was the first member of law enforcement to arrive on the scene, after Deputy Glaze.

He described to lead state prosecutor Richard Dufour what he, Deputy David Fenstermacher from the Rusk County Sheriff’s Department, and Officer Jacob Schmidt from Ladysmith Police saw as a description of Glaze’s condition after he was shot.

“Officer Schmidt made a comment that Deputy Glaze had a massive head wound,” Stolp said.

“And, what happens then?” Dufour asked.

Officer Stolp replied: “Deputy Fenstermacher also said something to the effect of ‘Dan is twitching.’”

The trial is scheduled to last until Oct. 5th.

MENOMONIE, Wis. (WEAU) -- The trial of Doug Nitek began Tuesday in a Dunn County courtroom, with images and perception commanding the morning discussion.

“Every action of the defendant was a separate choice,” Amber Hahn, an attorney for the prosecution, said to a jury of 10 women and five men during the state’s opening statement. “He chose to end the life of Dan Glaze.”

During her statement, Hahn attempted to meticulously describe each shot fired at law enforcement the night of October 29, 2016, saying with each shot: “He steadied the rifle. He aimed the rifle.” She also described Glaze having a “massive head wound” as the result of a shot fired from a Remington Savage 110 bolt-action 25.06 rifle with scope, which belonged to Nitek.

Nitek was joined with a defense team which is attempting to portray the Rusk County man as not perfect – but not guilty of 1st-degree intentional homicide.

“It’s fair to say that Doug Nitek won’t be citizen of the year,” Charles Glynn, one of Nitek’s defense attorneys, said Tuesday during his opening statement.

Glynn told the jury Nitek was likely guilty of nine of the 31 counts against him, attempting to state his client took responsibility for counts tied to a felon possessing a firearm and drug possession. He further implored Nitek was merely defending his property that night.

“All he wanted to do was live another day,” Glynn told the jury.

The first witness called was Sarah Glaze, the widow of Deputy Glaze. While her testimony was brief, it was accompanied with a picture of Deputy Glaze taken in early-June of 2016, joined by his son and daughter.

The next prosecution witness was Trooper Derek Hanson with Wisconsin State Patrol. As a member of the patrol’s technical reconstruction unit, he was called to walk the jury through the layout of the scene on the Nitek property. The state also showed pictures of Glaze’s 2015 Ford Explorer squad car, including the appeared trajectory of bullets.