Travel not advised: State of emergency declared for E.C. County 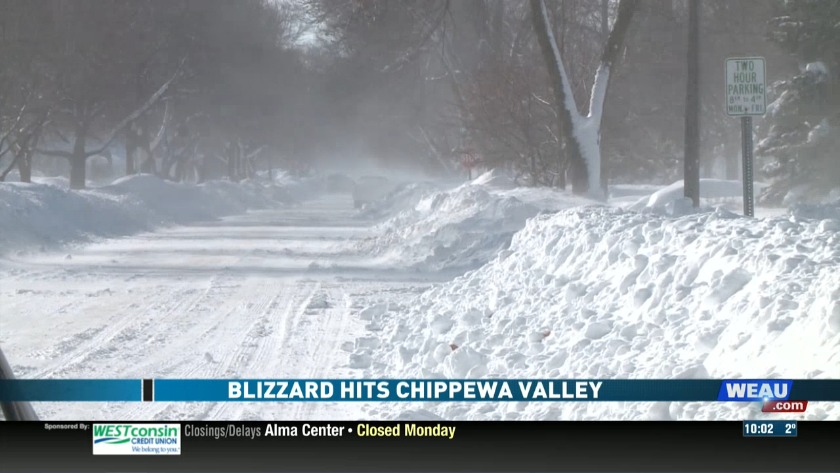 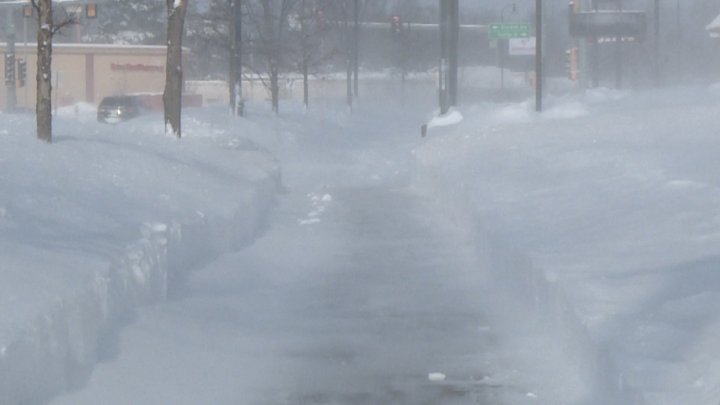 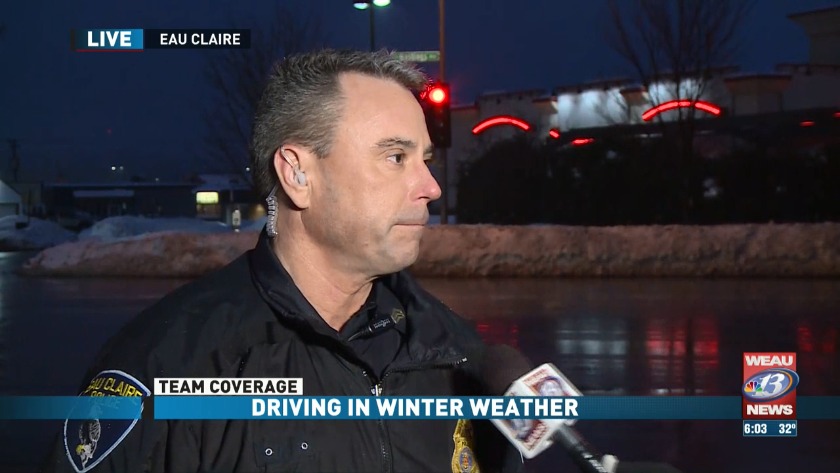 WESTERN WISCONSIN, Wis. (WEAU) -- A state of emergency has been declared for Eau Claire County, as a result of Sunday’s blizzard.

A declaration was sent by Eau Claire County emergency management coordinator Tyler Esh on Sunday night. In it, he said the state of emergency was called because the County Board is “unable to meet with promptness” and that “the emergency will cause the county to expand, commit, and exhaust its pertinent available resources.”

The state of emergency will last until Tuesday at 5 p.m. It states that motorists are advised not to travel due to snow and ice-covered roads.

***SNOW EMERGENCY-PLOW OPERATIONS END AT 6PM***
From Eau Claire County Highway Commissioner Johnson, snowplow operations for all roads except the State Highways will stop at 6PM due to poor conditions. Plow operations will resume early Monday morning. Monday commute/schools will be impacted

All South and northbound lanes are closed off at WIS 35/WIS 54 to 3rd St due to the weather.

The Trempealeau County Highway Department has declared a snow emergency. With the amount of blowing and drifting they are unable to keep up with snow removal on all roads including major Us and State Highways. Many roads are drifted shut and not passable. The Trempealeau County Highway Department is pulling their trucks off the roads so conditions are only going to get worse. Travel is not advised!

The city of Eau Claire will have plow crews going through the residential areas over and over throughout Sunday night. Even though the snow stopped Sunday morning there has still been a lot of work to get done as the wind keeps blowing the snow everywhere.

“We’ve had some big storms but to be dumped on again and again and again that’s kind of a new one,” said Lawrence Haakenson-Komorow, from Eau Claire. He says he is running out of space to keep putting the snow as he clears his driveway. “Keep moving it that is all you can do is just a little at a time,” he added.

Locals spent the day clearing driveways, sidewalks and their cars from the massive amounts of snow that fell over the weekend. “Just never ending, not sure when this is going to get done,” said Bev Dorn from Eau Claire. “We have to go in the backyard and get tunnels dug out for dogs to go in.”

But even though it is a lot of work and the wind keeps whipping the snow around, some people are staying positive about the snow. “This is what kids would love to go out and build snow forts in this is what I remember when I was a kid,” Dorn said.

**Chippewa County**
Travel is not advised due to blizzard conditions. The highway department is asking motorists to stay home and off the roads unless it is absolutely necessary to travel.
Due to a crash all westbound lanes are closed on I-94 westbound at milemarker 92 by Highway B - Jackson County

***CRITICAL*** Trempealeau Co. Sheriff's Office
Roads are becoming impassable. The highway department and township plows cannot keep up. It is extremely dangerous. We may not be able to get people to you if you choose to drive. County Road K and County Road M will now be closed near Trempealeau. It is probable that more roads will soon be closed as well. Please stay put and do not drive unless it is an emergency.

***Road Updates from Highway Commissioner Johnson***
Eau Claire County Highway Dept is having trouble keeping north/south county roads open due to the wind and drifting snow. Avoid these roads! Even better, avoid all roads and stay inside if you can

WEATHER VIDEO: Attached is just a small look at the strong winds and blowing snow on Sunday, Feb. 24. This is right outside the door at WEAU, along Hastings Way in Eau Claire. This area has lots of buildings blocking the wind, and you can still see the snow blowing around a lot.

Motorists are encouraged to stay off the roads.

We have seen what seems like an endless supply of winter storms this month, and the latest is moving in tonight. This storm will be powerful and quick hitting with heavy snowfall, strengthening winds and overall dangerous travel conditions through the overnight. Once the storm begins, conditions will start to worsen after the first hour or two and if you don't have to go out on the roads, it will be best to stay home. 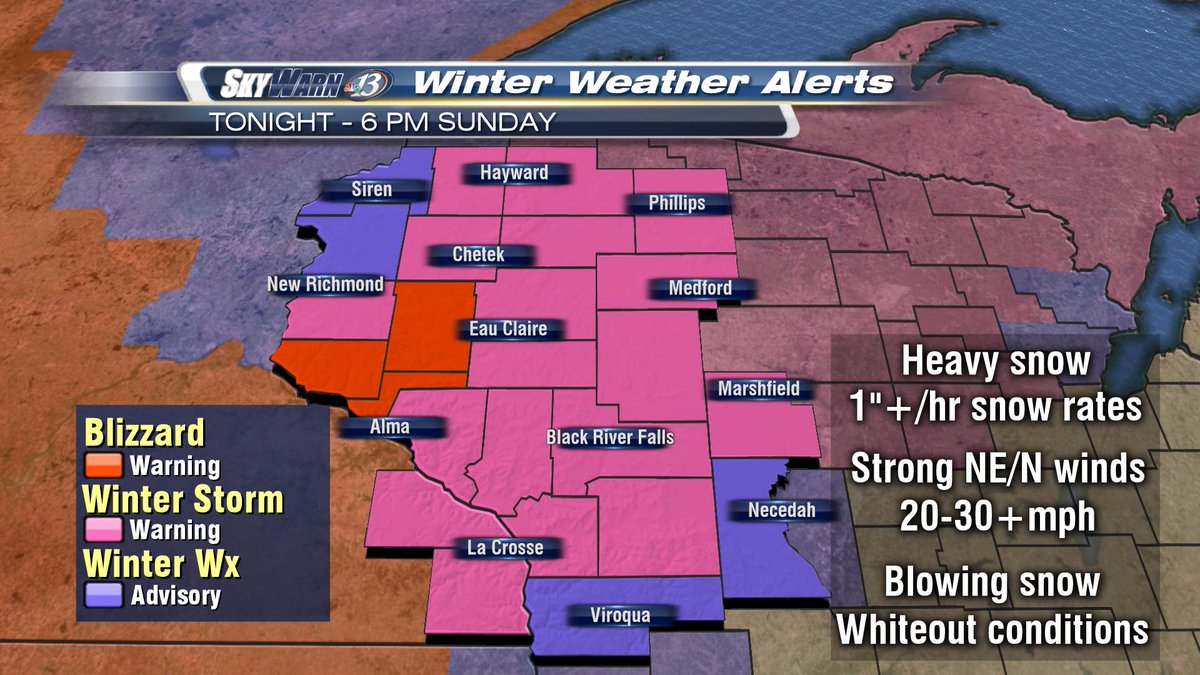 TIMING: A wintry mix of snow and rain will be arriving through 9 PM tonight, overspreading most of our area from south to north. Any wintry mix will quickly go over to snow in the Chippewa Valley, while further south towards La Crosse, it will take longer. The storm will continue through the overnight, before starting to taper off between 7-9 AM Sunday morning. Lingering flurries and snow showers may continue up until around the noon hour.

SNOWFALL: This storm will drop a significant amount of snow in a relatively short amount of time. Snowfall rates are likely to be at least 1" per hour at times, and possibly even a bit higher during the height of the storm. There will be a fairly large swath of 6-9" accumulation for a good part of our area, while in the middle, a narrower swath of 8-12" with locally higher amounts possible. Unlike previous storms this month, this will be a heavy, wet snow that will be more difficult to clean up. Snow ratios are going to be closer to the more typical 10-1, meaning 10" of snow for an inch of water. 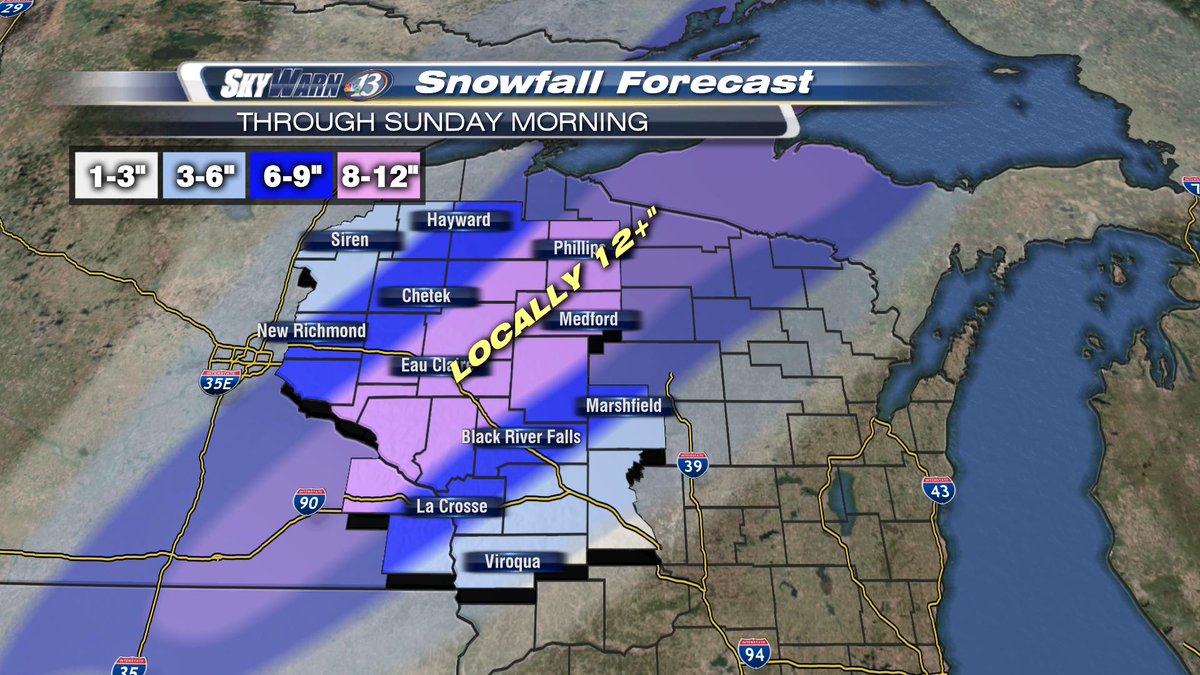 IMPACTS: The only good thing this go around is the storm is occurring over the weekend and the worst of it will be moving through during the night when most of us will be sleeping and won't have to be on the roads. Travel will become dangerous with quickly accumulating snow and increasing northeast and north winds tonight. They will be in the 15-25 mph range during the height of the storm, with some higher gusts possible, while increasing further early Sunday morning as the storm pulls away. They will begin to shift to the northwest, increasing to 20-30 mph, with gusts of 40-45 mph expected. Even though this will be a heavier snow, these type of winds will still lead to significant blowing and drifting through much of the day. Cleaning up this storm will be quite difficult in these conditions, combined with temperatures falling into the teens and below zero wind chills!

We will continue to provide the latest information on this storm right here on weau.com and on all of our news programming on WEAU 13 News through the weekend. You can also get additional information by following us on social media.